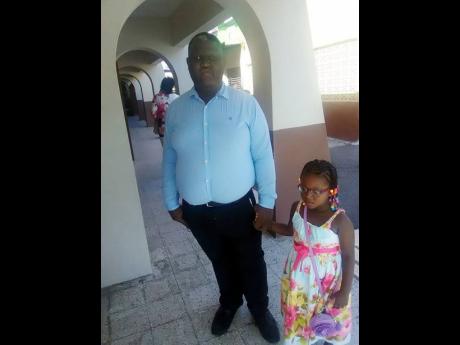 Jerome Jackson, 30, is a blind man who is fearful that his five-year-old daughter may also go blind because of a history of blindness in his family. Jackson lost his sight suddenly in 2001.

But before him, his grandmother and uncle lost their sight before doing surgery and repairing their vision.

His father and grand-uncle also went blind and haven't been able to see again. This is a 'family trend' he wants nowhere near his daughter, who recently had to get glasses.

"My grandmother got blind in 1988, but she got her sight back after three years. My uncle got blind and he got his sight back, too, after he did surgery in England. My grand-uncle was also blind, but he passed off. So, it's just me and my father leave now," Jackson told THE WEEKEND STAR.

The Woodford Park, Kingston resident says the thought that his daughter could have the same experience is frightening.

"I am totally blind and recently I took my daughter to the eye doctor. She's supposed to get a better (pair of) glasses to improve her sight, and it's about $50,000 for the glasses. The doctor said her eyes are not that bad, but the glasses will help her more. And the left eye is better than the right eye, so they have to triple the lens for the right eye. So, that's why I am trying to get the glasses for her, but it's challenging for me," he said. Jackson went blind when he was just 11 years old.

"I thought my eyes were bleeding. Everything was red. A teacher of mine passed off and my father and I went to her house. On our way back, I lost my sight. I don't know what happened. I don't know what's the cause of it all now," he recalled.

He was then admitted to Kingston Public Hospital for five months, where he learnt that there was a scar and infection behind his retina.

He has no idea what his daughter looks like. "I haven't seen her. That pains me every day," he related. "My dad got blind when he was 20. He has three of us and him don't know how none of us look.

Since February, Jackson has been facing challenging times after he lost his source of income in February. The COVID-19 pandemic came one month later and made life harder.

"I was working as a massage therapist with the empowerment programme through the National Youth Service, but there's nothing there for me anymore. I usually get some assistance from a charity, but I still have problems paying my rent sometimes," he said.

Jackson began studying at The University of the West Indies in 2014 and was reading for a degree in entertainment management and culture. However, he has to sit out a year due to financial issues.

Dr Peter Swaby, ophthalmologist, told THE WEEKEND STAR that "We need to know the cause of blindness for at least two of the relatives before we can ascertain whether it is genetic."

Jackson said his grandmother had cataracts, which were removed to repair her vision. But Swaby noted "If it's a hereditary link we're looking at, that information from the grandmother wouldn't be enough."