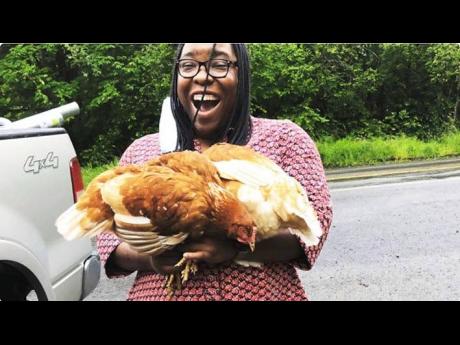 Shellie-Ann Kerns worked as an aircraft dispatcher in the United States of America, but took time off from work in May because of the COVID-19 pandemic. This decision, she said, has allowed her to pursue her passion of farming.

The May Pen, Clarendon, native, who now resides in Washington State, said she has been gardening for seven years, but considered going into commercial farming due to the disruption in food supply.

"There are videos of dairy farms throwing out milk because they didn't have any schools to send it to, or restaurants, because everything was shut down. My vision is that there will be more food production at a local level so we don't have to rely on those huge farms," Kerns, 31, told THE STAR.

She said that growing up in Jamaica greatly influenced her inclination to farming as she holds firm to the mantra: 'Grow what you eat and eat what you grow.'

Admittedly, she said she didn't see the economic potential farming holds, but she knew it was important to grow your own food. "My mother always had her own little farm, she always knew about plants and their medicinal value," Kerns shared.

Kerns has a 20-acre farm from which she recently reaped peppers, onions, callaloo, Jamaican scotch bonnet peppers, sorrel and sweet potatoes. She also has chickens, which give eggs, and goats. She is preparing to distribute 500 pounds of garlic to restaurants. The garlic, which she has been planting since she left Jamaica in 2013, is used in the production of Jamaican-styled seasoning, which she retails.

Kerns is seeking to expand the business, but needs to purchase equipment that would boost her farming operations. So far, donations have allowed her to purchase a compact tractor that assisted her in clearing the land for a new crop season. "I'm not at my goal yet, but it has really blown my mind the way people have supported me. Buying the tractor is a really huge help and I've done so much with it so far. I will be constructing a greenhouse that will extend the growing season for a lot of vegetables when the winter time comes," she said.

The passionate farmer currently has a campaign on the crowdfunding site, GoFundMe, titled Help Shellie-Ann Build a Sustainable Farm (https://gf.me/u/yjwmis).

"I am an unapologetically black woman launching a farm in western Washington. Your donations will help me buy a tractor and implements, drill a new well, build high tunnels as well as construct a commercial/demonstration kitchen for making spice blends and teaching," Kerns said in her GoFundMe campaign pitch.