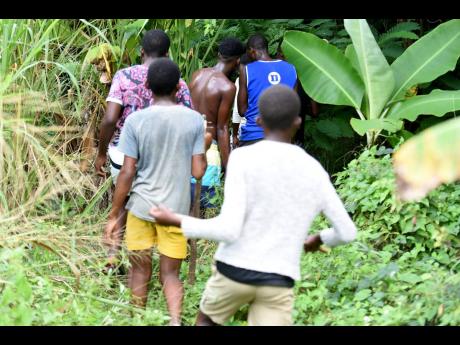 Young boys join in the search for Winshae Barrett, one of the St Thomas children who was abducted. She was found alive.

Hear The Children's Cry founder Betty Ann Blaine is once again calling for the Sexual Offenders Registry to be made available to the public.

This comes after the events of the weekend where two young girls from Bath in St Thomas were kidnapped, possibly by the same man. Blaine said "It is inconceivable that a predator could abduct two children so swiftly, and apparently so effortlessly, in the same community." While both girls have since been found, their abductor is still at large.

"The truth is with this case over the weekend of these two children, we notice that in one report it said that the suspect is somebody who was before our court. Facing the court for rape and illegal possession of a firearm. If that is so, then how can this person be on bail?" she asked.

Blaine told THE STAR that there is a need for potentially dangerous strangers entering into a community to be identifiable by the public.

"What is happening in our country is that people are harming children up and down the place. They rape them, they abuse them, they murder them, they dismember them, and look at the case of Ananda Dean, perhaps the best known case of a child who was abducted and murdered in this country," said Blaine. "It's been 12 years and nobody has been charged with Ananda's murder. The message has to be sent very firmly across the length and breadth of Jamaica, that we are not going to put up with it. If you harm a child in whatever way, you are gonna face the penalties and those penalties must be harsh."

As of August, there are 331 persons on the registry which is managed by the Department of Correctional Services. The registry can be accessed by certain groups, including the police, persons engaged in professional counselling of sex offenders, persons managing educational institutions where offenders are enrolled or seeking to be enrolled, and prospective employers and employees of sex offenders.