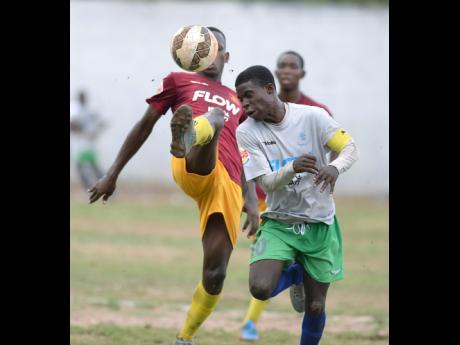 Broderick has given the youngster free rein and charged him with the responsibility of taking Vauxhall to unprecedented heights this season.

On Tuesday, the player was at his majestic best in a three-goal performance against Norman Manley, showing why his coach rates him so highly and believes that if they are to make meaningful progress this year, he will have to be at the heart of it.

Wilson is not feeling any pressure. On the contrary, he is confident in his ability and relishes the task.

?I really enjoy the role because I know I can manage it,? he said.

The Brown?s Town FC midfielder carried his tally to five with his three-timer, but his game is more than goals, he is the main creative spark and provider of assists as well.

?I think my contribution has been great, the coach says (the team) feed off my energy so I have to always make my presence felt and put out extra effort and I think I am doing that,? he continued.

?This is the first hat-trick in my career and it?s a wonderful feeling, as it help us get closer to the next round, it?s a good feeling,? he added.

The win over Norman Manley edged Vauxhall even closer to a second round berth.

?We will leave that part (second round) to God,? he said.

The player was injured in the last game and was taken out after an hour but Broderick doesn?t expect that to keep him out.

?It was a precautionary measure to take him out and preserve him for the upcoming games,? he said.