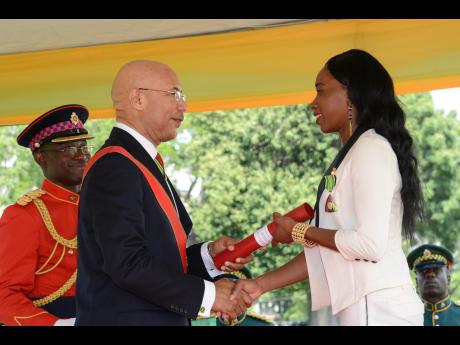 In addition, Cynthia Cooke, a past principal of Camperdown High School and past member of the Inter-Secondary Schools Sports Association (ISSA) was recognised for service to education.

Prendergast, 52, who officiated at the 2002 FIFA World Cup Final in South Korea and Japan, was awarded the Order of Distinction (OD) in the Rank of Officer for his invaluable contribution to the advancement of Jamaica's football and refereeing.

Stewart, who started his service to football in 1967 and is the current chairman of Harbour View FC and vice-chairman of the Premier League Clubs Association (PLCA), was also given the Order of Distinction for long and commendable service to Jamaica's construction industry and sports.

Williams-Mills was recognised with the OD for her dedicated service in athletics. She anchored Jamaica's 4x400 metres relay team to gold medal at the World Championship in Beijing, China in August.

Wright, 65, a former Jamaica batsman and former president of the Jamaica Cricket Association, was recognised with the Order of Distinction for his invaluable contribution to the development in the construction industry and sports in particular, cricket, in Jamaica.

Watson, 77, played seven Tests for the West Indies in the 1950s and early 1960s, taking 19 wickets with the best bowling figure of 4-82. He was a fast-bowling opening partner of Wes Hall.