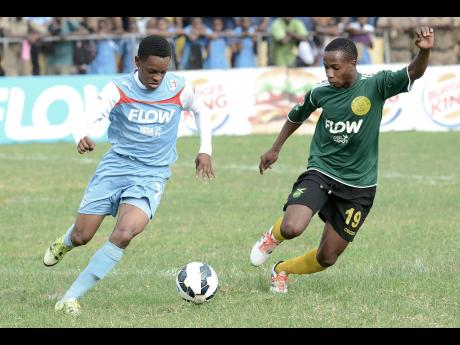 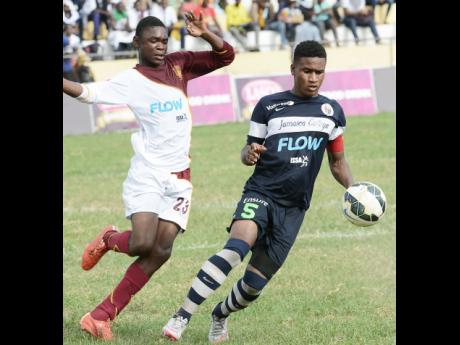 The feature game, which was probably the corporate area schoolboy game of the season, in terms of quality and intensity, saw St George's hold off a strong challenge from St Jago for a 3-2 win, with two goals from Shevon Stewart and one from Alex Marshall.

In the opening semi-final, Wolmer's turned back Jamaica College 4-3 on penalties after a dour 0-0 draw.

St Jago earned a lot of admirers after their impressive win over Kingston College in the quarter-final, and they showed their quality again, pushing the Georgians all the way.

However, the Spanish Town school couldn't find an answer for mesmerising Stewart and Marshall, although goalkeeping errors accounted for the first two goals.

Stewart fired St George's ahead in the 12th minute after goalkeeper Akeem Chambers spilled a free kick inside the area and the striker capitalised. But St Jago rallied and got back on even terms seven minutes later when Ryan Smart broke through and hammered a shot past John Wilson in goal.

Both teams continue to trade blows and created good chances after the break, but it was the Georgians who nudged in front on the hour when Marshall beat Chambers with a free kick from very tight angle.

They added a third eight minutes later, when Marshall picked out Stewart, who finished spectacularly from 12 yards.

St Jago pulled a goal back in the 75th minute, but despite having the Georgians on the ropes for the remainder of the game, they failed to take advantage.

"We expected it (tough match), they are a tough team, they play hard. But St George's are a confident team, we knew what to expect, so we were not surprised and we handled it well," said winning coach Neville Bell.

In the first game, Wolmer's and Jamaica College battled for 120 minutes without scoring, leaving it to penalties to decide the first finalist.

"We set our objective, we know we are as good as any other team and we are just quietly achieving our objectives. We have our pride in keeping clean sheets as defence win championships and that's out strength," said Wolmer's coach Vassell Reynolds.