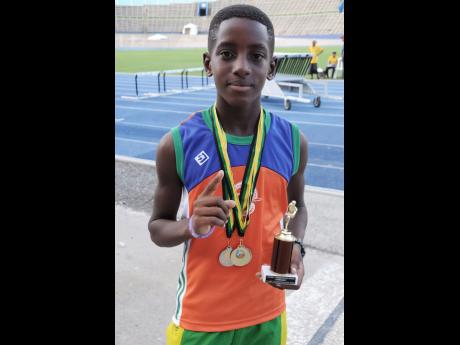 Gladstone Taylor/Photographer Yourie Lawrence of Naggo Head Primary School celebrates after collecting his medals for winning the Class One boys' sprint double at the Institute of Sports (INSPORTS) National Primary Schools Athletics Championships at the National Stadium on Saturday. 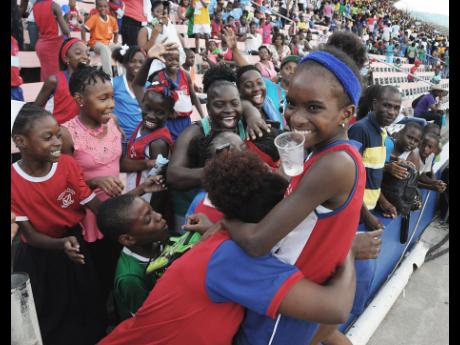 Gladstone Taylor/Photographer Lawrence Tavern Primary School's Subbreana Breakenridge (cup in mouth) is congratulated by her mom, schoolmates and supporters moments after winning the 800m girls open at the Institute of Sports (INSPORTS) National Primary Schools Athletics Championships at the National Stadium on Saturday.
1
2

Yourie Lawrence was one of many reasons seven-time champions Naggo Head Primary were so dominant at this year's Institute of Sports (INSPORTS) Primary Athletic Championships at the National Stadium last week.

The Grade five student led from the front as he took the sprint double in fine style. He went into the 100 metre final under intense pressure and delivered in 12.62 seconds.

Said Lawrence: "I have worked really hard for this all season and I wish to thank my parents for their support, and all the coaches."

"Yourie is dedicated to his training and it as paid off for him, and I love how he balanced his training with school work. He is averaging over 90 per cent in school and I think that's great," his stepfather, Everton Clarke said.

The youngster's mother Judith revealed that athleticism "runs in his blood" adding that she ran while in high school as does his brother.

"Yourie is not only a good athlete he is a team player and a sportsman. Yourie plans to be a professional athlete in the near future," she said, adding that he was inspired by Kingston College's ace sprinter, Jhevaughn Matherson, and World and Olympic Gold medallist Yohan Blake.