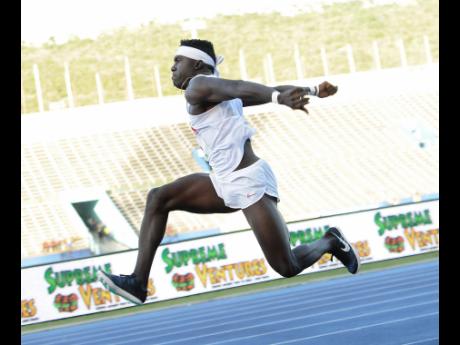 @Normal:Clive Pullen winning the men's triple jump with a personal best and Olympic Games qualifying mark of 16.90 metres on the opening day of the JAAA/Supreme Ventures National Senior Championships at the National Stadium on June 30.

On the June 30, in front of a small crowd inside the National Stadium, Clive Pullen did what only two before him could manage when he became only the third Jamaican man to qualify for the Olympics in the triple jump.

The last Jamaican male triple jumper to compete in the Olympic Games was Henry Jackson in 1972.

It's a reality that hasn't quite hit home just yet for 21-year-old Pullen, a student at the University of Arkansas and former captain of Kingston College's track team.

"I have been having flashes ever since I qualified but it hasn't really hit me yet. I thought it would when I got into the camp, but it really hasn't. Maybe when we get into the Athletes' Village and I see the other athletes from the other countries and so on, maybe it will then or probably during the Opening Ceremony," he told STAR Sports yesterday.

"Initially, when I qualified, I wasn't aware of the fact it has been so long that Jamaica had a triple jumper, but I'm honoured and privileged to be in this position. I'm young in the game but for sure I will be going out there to give it my all and make my country proud," he added.

Pullen's 16.90m winning jump at the National Championships was the result of a new approach by the youngster, who says he is paying greater attention to the little details.

The jumper says he is hoping to further improve his personal best in the event and is determined to make his mark in Rio.

"I've wanted to be an Olympian ever since I started to do track and field and its just a blessing to know that at 21, I am at my first Olympics, first of many I hope," Pullen said.

"The triple jump is a very technical event and a lot goes on out there more than what is easily seen ... I have been focusing on the process, the small things that I need to focus on to get the results I need and not so much the distance," added Pullen. "Getting the sleep, the hydration, making sure I take care of my body, work hard in training and it has worked well for me this season."