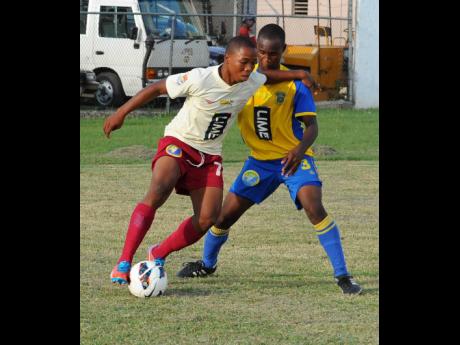 Paul Clarke photo In this file photo Godfrey Stewarts' Michael Kerr (left) dribbles the ball while being challenged by Jerome Foster of Rusea's Hugh, during their Ben Francis Cup KO first round game on Wednesday, October 10, 2013 at Jarrett Park.

With the vast majority of last year's team unavailable for this year's campaign, Leford Parce, the coach of former daCosta Cup champions Godfrey Stewart High School, is not bubbling with the usual enthusiasm going into the 2017 schoolboy football season, which will start today.

In fact, Parce believes that the task will be quite tedious after losing most of the fifth-form players due to disciplinary action taken against them by the school's administration. According to him, the players in this year's team are untried players who do not have either Under-16 or Under-14 experience under their belts. However, he is confident that both midfielders Tyriel Williams and captain Alvarez Cooper will have a breakout season this year.

"We are going to be having a pretty young team because we have not retained any of our older players from last season," said Parce.

"We started late, so we had only four weeks of camp preparation," said Parce. "However, we have been unbeaten in all our preseason games, so I am hoping that it will help the guys going into our first game on Monday."

"Our first goal is to go on to the second round. What this will do is give the guys the necessary competitive games to gain experience," said Parce.

"After the first round, we should be able to compete because it's a good bunch of guys. It is just that experience lacking."

Godfrey Stewart High will kick off their season on Monday with a Group D fixture against Black River High. The other teams in the group are Grange Hill High, Little London High, the Manning's School, and Petersfield High.