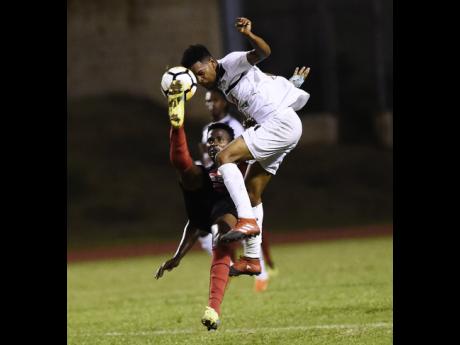 File Cavalier's Alex Marshall (right) and Tamar Edwards battle for possession of the ball during their Red Stripe Premier League contest at Stadium East on November 23. The game ended in a 2-2 draw. 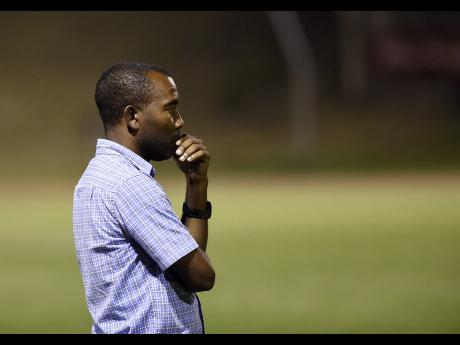 Cavalier SC Technical Director Rudolph Speid said that based on their first-round performance against champions, Arnett Gardens, he believes that his team, poses the best chance of ending the 'Junglists' unbeaten start to the Red Stripe Premier League.

Cavalier led Arnett 2-0 in their first meeting, however, Arnett came back to draw the game 2-2. Based on their display in that game, Speid thinks that if there is any team to beat Arnett, it is Cavalier.

"The first time we met, that was the best match in the league so far," Speid recalled. "We messed up. We shouldn't have allowed them to get back. But (for this game) we are going out the same way. We are going after them, and we are hoping that this time we don't mess up.

"We are the only team to have scored in two games against them and led them two nil. We really believe and have the confidence that if (beating Arnett) is to really happen, we are the team most likely to do it," he said.

Although unbeaten in eight games, Speid is not totally impressed with his side. "We have only won three (of the eight games), so that is what we need to work on," he said. "But it feels good to be unbeaten after eight games and have the second longest streak. But we are disappointed that we could not turn some of those draws into victories," he added.

For Sunday's game, Speid noted that they will have their full complement of players for the first time this season, although some still need acclimatising. "We haven't had all our players at one time and we hope to be at full strength Sunday. But we will have teething pains, because we have brought Kaheem Parris, Jaedin White, and Jamoi Topey from the school league, and it will take them a little time to adjust, but these are quality players who have been playing for us over the years, so they know what to do," he said.

"We are still not into top gear but Arnett Gardens always brings out the best in Cavalier. But it would be an honour for us (to beat Arnett). It's a good milestone to try an achieve," he added.

Cavalier are sixth in the table with 18 points, eight behind leaders Arnett on 26 points.