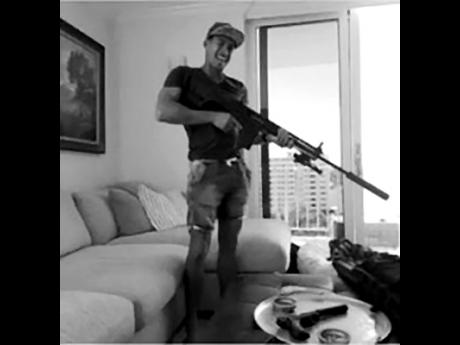 Rayne Russell is seen here posing with a high-powered rifle on an Instagram post. He attracted unwanted attention after the post was considered a terror threat aimed at the Ultra Music Festival in Florida.

Campion College tennis coach Rayne Russell said that the controversy he found himself in regarded as a supposed terror threat in the United States was what he describes as "a huge misunderstanding."

Russell posted a photo of himself holding a high-powered rifle on Instagram with the Ultra Music Festival tagged in the caption.

Persons intending on attending the concert became fearful that Russell had been planning a mass shooting, similar to the one which occurred at the Route 91 Harvest music festival in Las Vegas, Nevada, on October 1 last year, which left 58 dead and 851 injured.

According to the Florida police, Russell went to Miami for the festival and took the photo in Fort Lauderdale with a family member's legally-owned guns.

After questioning Russell, they determined that there was no credible threat, but instead, a social media slip-up and a terrible lapse in judgement.

Russell, in a subsequent post, said "What happened within the last couple days was a huge misunderstanding. A picture that was posted was (understandably) taken in the wrong way. I had hashtags put up on the picture, which I then removed minutes after, but the damage had already been done.

"I apologise for this ignorant mistake and to whom it may have offended/terrified. Definitely a lesson to be learned for the digital age."