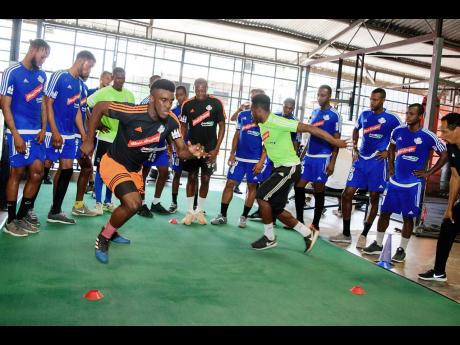 Portmore United goalkeeper Shaven Paul said that despite Kemar Foster's good form in goal for the club lately, he will keep fighting hard to regain his spot between the posts for the Red Stripe Premier League final against Waterhouse FC at the National Stadium on Monday night.

Paul, who was the first choice in seasons past and earlier this season, suffered an ankle injury, then one to his hip. As a result, he has had to watch from the bench as Foster became the first choice.

"It's a work in progress," he said. "We have good goalkeepers around the team. I'm out on injuries, and it would take a lot of work to get back because currently [Foster] is keeping well. He's coming off back-to-back clean sheets in the semi-finals, and he's doing a great job. So it won't be easy. I'll have to work hard and show my class in order to get back in between the sticks."

Paul has also cleared up the confusion regarding the pronunciation of his name.

Many fans of Portmore United and followers of action in the Red Stripe Premier League have seen the name 'Shaven Sean Paul' and have wondered why he has such an unusual-looking name. Opinion had been divided in the public between whether the name is pronounced 'shay-ven' (the adjective derived from shave) or 'shah-ven.' The player confirmed to STAR Sports that it is the latter, but he said he has never really discussed with his parents why he was given such as name.

"No, mi never ask them, but the name is actually 'Shah-ven,'" Paul shared. However, he said that he does not take offence to hearing his name mispronounced.

"It doesn't bother me," he said. "If I'm on the road and anyone calls me whichever, I answer. So it's not really a big issue to me. He also explained that 'Sean' is actually his middle name, and not part of his Christian name. He continued that it is always displayed on match cards and television line-ups because of the club's administrators.