No cracks in the Concrete! - Devon Moncriffe upbeat about form despite questions of aging 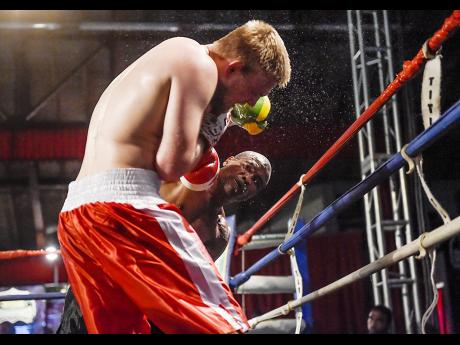 In spite of many onlookers at the Chinese Benevolent Association saying that Devon 'Concrete' Moncriffe is slowing down in the ring, the 41-year-old insists that he is still as fit as ever, after his fourth round technical knockout win over Tyler Wilson in the Wray and Nephew Contender Series on Wednesday night.

Wilson, a Canadian mixed martial artist, was brought into the tournament at short notice to make his professional boxing debut after a late withdrawal of Moncriffe's original opponent, Daniel Roach. As such, many had expected an early knockdown from the 2013 Champion. However Moncriffe, despite being control, from start to finish, could not find the knockdown punch until 39 seconds into the fourth round. But he told STAR Sports that the fight lasting that long was good because he wanted to address being ring rusty.

But the veteran boxer said that Wilson, nor any other obscure boxer in the competition, should ever be underestimated.

"Mi nuh surprised yuh nuh (that Wilson lasted that long)," he said. "Right now yuh cyaan underestimate no fighter. Sometimes yuh hear seh a man nuh have no fight and same time him go inna di ring and beat yuh. So you can't look down pon a next opponent and seh yuh better dan him. Dat nuh work. Ah fight yuh come fi fight and one punch can done it."