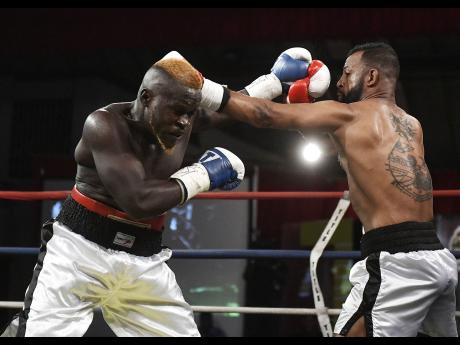 Fabian 'Truck' Tucker said that despite not agreeing with the decision to award victory to Tariq 'Desert Storm' Ismail after their Wray and Nephew Contender Series first-round bout on Wednesday night, he does not feel hard done by.

Ismail defeated Tucker by a split judges decision after five rounds, with Laurence Neufville scoring 49-46 for the Jamaican, while Ransford Burton scored 48-47, and Eion Jardine 49-46 in his favour.

"Yeah, I'm surprised, definitely," Tucker said. "In the first round and the second round, I had him. In the third round, he came at me and I went back at him, so I was looking for a better score but they are the judges and they know what's best.

"Even when he was holding me, I was working the body, so the scorecard ... I don't even really know," he explained. "They said he's the best man and they gave it to him so I can't complain about that."

It was reported that Tucker had been 14 pounds overweight coming into the fight and Ismail was aware of this. He used his quickness as a mixed martial artist to his advantage, as his constant moving about the ring, bobbing and weaving from Tucker's shots, not only frustrated the youngster, but also made him fatigued.

"It was absolutely a part of the plan," Ismail said. He was getting a lot of power punches in, and we wanted to weather the storm so that no mistakes could happen and I couldn't get caught off guard. It was my birth and I didn't want to lose.

But the Canadian, who turned 28 years old on Wednesday, said that despite winning, he was not comfortable with his performance.

"You know what? Sometimes things happen, it wasn't my best performance but I give my hats off to Tucker. He came out strong. I don't want to talk about too many excuses but we'll just keep it at that. There was a little bit of a difference in the weight, but no need to talk about it. I'll just get ready for the next opponent."

Tucker, 23 years old, now has a professional record of three losses and one draw.

Ismail now goes on to face Richard 'Frog' Holmes in round two. The other round two matches see Michael 'Wasp' Gardener facing Dave Leblond (this Wednesday), Nico Yeyo up against Ricardo Salas, and Devon Moncriffe versus Waseem El Sinawi.