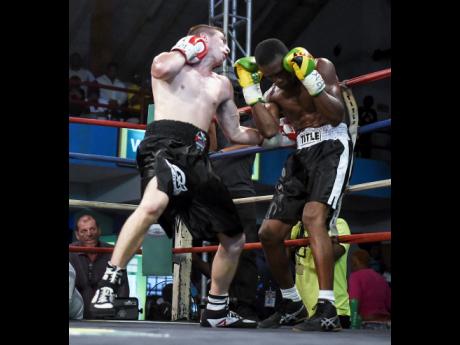 Canadian Dave 'Fast and Furious' Leblond had no difficulty securing his spot in the semi-final round of the Wray and Nephew Contender Series with his win over 2012 champion Donovan 'Police' Campbell.

Campbell, the 49-year-old Jamaican, was brought into the contest at the last moment as a substitute for crowd favourite Michael 'Wasp' Gardener, who was disqualified for not making the weight. He struggled to get in any form of offence against Leblond, who wasted no time working away at him with repeated shots to his sternum. After two rounds, where Leblond was in full control, Campbell signalled to his trainer Earl 'Boom Boom' Foskin to throw in the towel and end his punishment.

Campbell had not competed since August last year when he had a draw with Fabian 'Truck' Tucker in Mandeville, but said he had been training since, as he was considered to take part in this season's Contender, but the show's producers decided on Tucker as a competitor instead. However, despite all the training, there was not enough match fitness and he said he suffered from 'ring rust' (a lack of sharpness in the ring due to inactivity).

"Really and truly, when mi start fight the first round and mi nuh si nuh click inna mi punch, mi seh to miself seh: 'Yuh know seh mi naa continue di fight,'" Campbell said after the bout. "The long lay-off kinda keep mi ring rusty. I was preparing for this tournament and never got selected suh mi did have to just tek mi mind offa it and move on to something else."

Leblond's trainer, Sam Plante, was pleased with the result, as his fighter stuck to the game plan of pacing himself early on and working Campbell's body, leaving him winded.

"It was the match plan to work the body, but just when it started, he saw that his (Campbell's) hands weren't high and close to the body, so he took advantage of it," Leblond said through Plante, who also served as his translator.

"Dave was ready for the fight. He's in the best shape of his life. This year, he got a new coach, new mental, and physical trainer. His elementation is better than ever. He's ready and he'll come out on top in the Contender. He's ready for everything, so we'll see how it goes."

Campbell came into the fight with extra motivation after a fire destroyed his house last week.