'No give up and no back down' - 'Concrete' Moncriffe 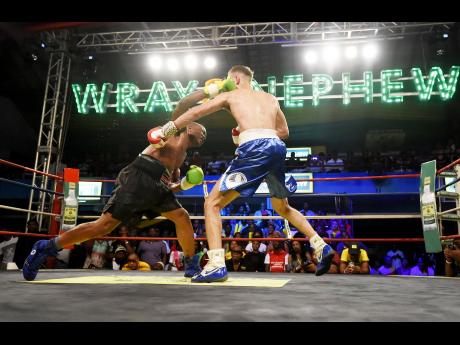 Gladstone Taylor / Photographer Devon 'Concrete' Moncriffe (left) lands a hard overhead right on Waseem El-Sinawi which led to the first knockdown of the night, in their quarter-final bout in the Wray and Nephew Contender Series at the Chinese Benevolent Association Auditorium on Wednesday night. 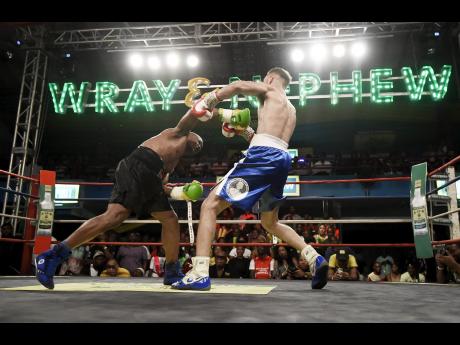 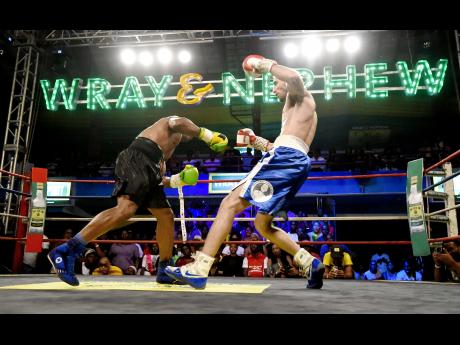 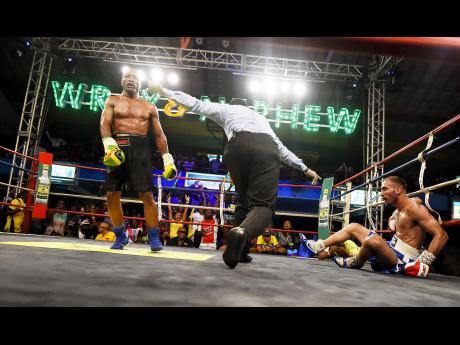 At 41 years old, Devon 'Concrete' Moncriffe is intent on proving his doubters wrong about his ability to compete with the younger boxers in this season's Wray and Nephew Contender Series.

Moncriffe secured a fourth-round knockout win over Canadian Waseem El-Sinawi on Wednesday night and said that he is as fit as anybody else in the competition.

"Di next man dem inna di competition, Devon 'Concrete' Moncriffe, is here, and mi standing inna di ring right now," he told STAR Sports. "Don't watch mi age. I don't fraid a none a dem. If dem is 25, I am 25 too. When mi come inna di ring, a fight mi come fi fight. No give up and no back down."

Moncriffe came into the bout the underdog as the tale of the tape favoured his opponent. He weighed 144lbs, one less than El-Sinawi; he had a reach of 70cm, to the Canadian's 74; and he was four inches shorter at 5'6". He paced himself well throughout the opening stages of the contest and gave El-Sinawi no room to build an offence. The 28-year-old was visibly bothered by Moncriffe's movement throughout these rounds, and his lack of jabs thrown made it difficult to show any form of ring generalship.

By the third round, the 2013 champion had the full backing of the spectators at the Chinese Benevolent Association auditorium as loud chants of "Concrete" filled the venue. From here, Moncriffe's offence grew, and in the fourth round., El-Sinawi let his guard down in coming forward and fell victim to a hard right that left him on the canvas.

After answering the standing eight count, he conceded another hard shot, this time in his neck. Dizziness got the better of him, and he fell to the mat again. This time, referee Peter Richards decided that El-Sinawi could withstand no more and ended the contest.

El-Sinawi said that he could not deliver that punch because of a jarring sensation in his elbow.

"My jab was hurting me the whole time, and I was rubbing it all the time," he explained. "I thought it was good until the first round when I threw the jab and he threw an overhead right and caught my elbow and it hurt so much. But I was trying not to show that it hurt, but it was."