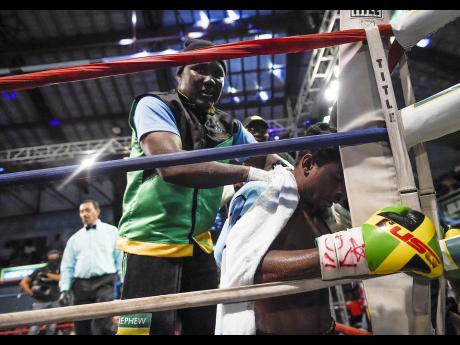 Richard 'Frog' Holmes (right) drops to his feet by the turnbuckle to catch his breath, while his trainer Carl Grant drapes him in a towel after his physically gruelling bout with Larone 'Jet' Whyte on Wednesday evening. 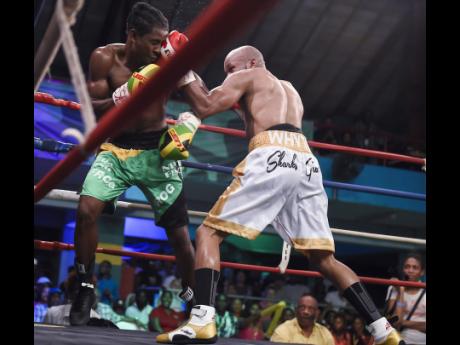 Richard 'Frog' Holmes (left) take a shot to the face from Larone 'Jet' Whyte in their Wray and Nephew Contender quarter-final round bout at the Chinese Benevolent Association Auditorium on Wednesday night.
1
2

Following his quarter-final round unanimous decision defeat to Jamaica's Richard 'Frog' Holmes, Larone 'Jet' Whyte said he felt he was robbed by the judges and will be filing an appeal against the result.

"Honestly, man, it's crazy, still," Whyte said. "Straight robbery! Unanimous decision? What kind of fight were they watching? I clearly won the last round. Like, come on! I don't even know what to say.

The bout went all five rounds with Holmes and Whyte trading blows throughout. Whyte had stepped into the contest to replace Tariq Ismael Salih, who had pulled out for personal reasons. He made the contest difficult for Holmes, who threw himself to a corner of the ring to catch his breath after the contest. Many fans who had been vocal in their support for hometown man Holmes turned from cheering to booing when they heard that judges Laurence Neufville and Jim Monkelbaan scored the fight 49-46 and Lindell Allen 50-45, all in favour of Holmes. Some said that while they have no problem with the decision going in his favour, they felt the contest was much closer than those scores suggested.

This is because Neufville and Monkelbaan's scores meant they thought Holmes won four of the five rounds, while Allen believed Holmes won all five.

Whyte, whose parents are Jamaicans, said that he felt Holmes being the local fighter influenced the decision.

"Definitely! Unanimous decision? That's crazy talk," he said. "I understand he's a Jamaican, hometown man, but end of the day, I'm from here too, so neutral ground dis. I still represent Jamaica same way. They shouldn't a do me like that!"

Holmes said he felt the decision was accurate.

"I felt I outboxed him all five rounds, so I have nothing to say," Holmes said. "It was a good fight. He fought strong as well but I got the victory, so nothing wrong with that."

"We're not the judges, we got the decision and I'm alright with it," Grant said.

Holmes now moves to the semi-final along with countryman Devon 'Concrete' Moncriffe, who lost to Whyte in last year's first round of the competition. Canada's Dave Leblond is also in the semi-final. The last spot will be decided on Wednesday when Jamaica's Nico Yeyo meets Canada's Ricardo 'Magic Man' Salas.