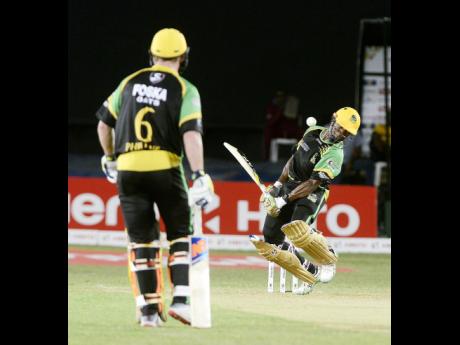 Jamaica Tallawahs captain Andre Russell labeled his team's performance as lacking fearlessness after going down by two runs to the Barbados Tridents in the Hero Caribbean Premier League last night. The loss meant the team ended its three match spell of home games at the Central Broward Park in Lauderhill, Florida this season without a win.

"Earlier this evening (last night) I had a meeting with the guys and told them to play fearless cricket," Russell said. "Tonight wasn't fearless and it's like the guys were afraid (to be dismissed). I'm not afraid. It's not the first I'm out in cricket and it won't be the last. So, I back myself if the ball is there and if the ball is not there. That's the type of spirit we have in the changing room, to be fearless. But I didn't see that tonight and that's the reason we're on the losing end."

After winning the coin toss, captain Andre Russell chose to field, saying that the pitch conditions will improve for batting later in the night.

Set a target of 157 for victory, the Tallawahs got off to a strong start, with opener Johnson Charles, returning to selection, smashing 42 off 32 balls, with six fours and a six along the way. He was dismissed after the Tallawahs raced to 80 runs. Two runs later, fellow opener Glenn Phillips was dismissed on 36 off 24 balls. He had four fours and two sixes in his innings.

Jamaica's momentum slowed from there, despite five dropped catches by the Tridents fielders. Ross Taylor, 26 not out off 28 balls and David Miller, 25 not out off 20 balls, could not produce the win as the deliveries ran out on the partnership with the score on 154 for three. Tridents bowler Steve Smith claimed two wickets for 19 runs.

The Tallawahs, who controversially played three of their five home games in Florida this season, had lost their two other games at the venue to the Guyana Amazon Warriors and the Trinbago Knight Riders (TKR). The other two games played at Sabina Park, in Kingston, were won against the St Lucia Stars and St Kitts and Nevis Patriots. They remain third on the table with six points, same as leaders Guyana and second placed TKR. The Patriots and Tridents are fourth and fifth respectively, both with four points and the Stars are last on two.