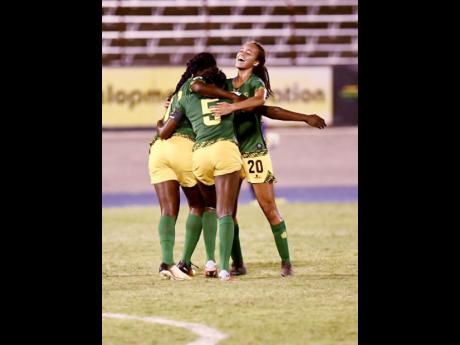 Jamaica blanked Bermuda 4-0 in their CONCACAF Caribbean Women's Qualifier at the National Stadium last night to move closer to a spot in the final stage.

Trudi Carter opened the scoring in the 17th minute, while the other scorers were captain Konya Plummer (33rd), Khadija Shaw (61st), and Giselle Washington, who added to the tally in stoppage time in another dominant display by the hosts.

In fact, the Jamaicans missed several opportunities to increase their margin of victory and despite the misses, Jamaica's assistant coach Lorne Donaldson said he was not too concerned.

Meanwhile, Bermuda's coach Naquita Robinson said they were happy to start against Jamaica and will be better in the coming games.

"We knew that Jamaica is a strong team so it was good to get that game out of the way. Some of our girls are in college in the US and Canada. They did not get the opportunity to train together. We only had matches against two college teams and we only had three of our starters. However, we will get better during the tournament," Robinson shared.

Cuba and Trinidad and Tobago are on three points apiece, while Antigua and Bermuda are without a point.

At the completion of the round-robin format, the top three will move on to the CONACAF stage in the United States in October, where three teams will gain automatic qualification to the 2019 World Cup in France.