Ricketts open to dialogue with doubters 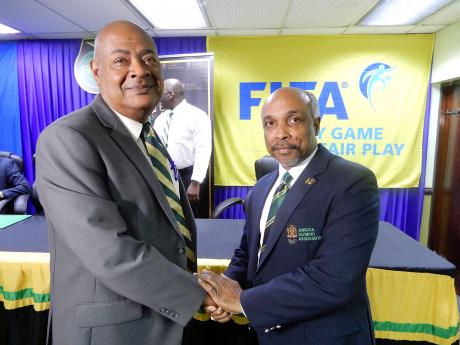 Jamaica Football Federation president Michael Ricketts (left) and Jamaica Olympic Association president Christopher Samuda at a press briefing in February to announce a partnership aimed at the qualification of football for the 2020 Olympic Games.

Jamaica Football Federation president Michael Ricketts says he is unconcerned with what he describes as "baseless criticism" from detractors about his time in the role.

Next Sunday marks exactly one year in office for the former Clarendon Football Association president and he said that he thinks that his time in charge has been mostly fruitful, although he admits some regrets. However, he said that there are a number of persons with unfair criticism, who have not offered any support in solving their perceived problems.

"The truth is that some people take Jamaica's football for a joke," Ricketts told STAR Sports. "You make comments that are unfounded and these to me are just diatribe and innuendo that are baseless. Some people are like that. Like I've always said, Jesus Christ was crucified and he never did anything wrong. So who am I that I won't be criticised? I have an issue when people arbitrarily make unfavourable comments."

But Ricketts has said that he is open to criticism in the right forum, if those posing them make themselves available for discussion.

"If you really want to see the football grow, call me and say to me that 'I think you're doing something wrong and I'd rather you try another way.' I could appreciate that," he explained. "But for you to just make wholesale baseless, sometimes disrespectful comments, that's really unfair.

Ricketts said that he is satisfied with his performance overall, especially as it relates to organising more games for the national teams and hopes he will have a stronger second year.

However, he said that losing Digicel as a sponsor is his biggest regret and he is actively looking for a replacement in the near future.