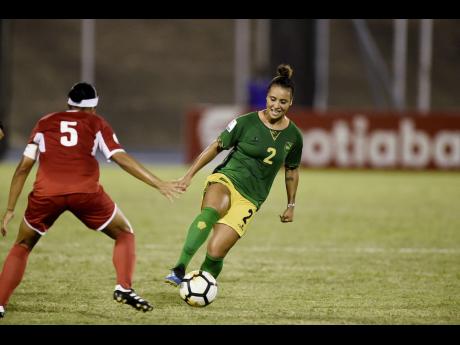 National defender Lauren Silver has blasted the Jamaica Football Federation (JFF) for its decision not to host a training camp ahead of next month's final round of Concacaf Women's World Cup qualifying in the United States.

After seeing a Gleaner article detailing JFF president Michael Ricketts' decision, Silver posted a video story on Instagram, with the label "This is so embarrassing."

"For the JFF to say that we can't run a camp because there are college players in universities in America is a lie," Silver said. "If this was the US, this would not be happening. They would have camp regardless of whether people are in school. I get that the majority of our girls are younger and they're in college so, okay, but this is for a World Cup qualifier and on top of that, most college coaches understand that it's country before club, so they're gonna release their players to play. This is just a hoax that the JFF is covering up because they don't want to host a camp for us. They don't want to spend the money and honestly, they need to just be up front about it."

JFF Women's football coordinator Elaine Walker-Brown said that she is shocked and surprised that Silver would voice her opinions in such a way.

"We did an interview the other day with (Assistant) Coach Lorne (Donaldson) and his technical staff has the players' best interest at heart and if they see an opportunity for them to have a camp, they are going to have a camp. The coaches are saying that based on the schools and pro-leagues, it looks unlikely. They didn't totally rule it out," Walker-Brown explained. "Once Coach Hue (Menzies, head coach) and Coach Lorne and even (Assistant) Coach (Andrew) Price see an opportunity, they will take it. What Lauren wants is what everybody wants."

Walker-Brown admitted to not seeing the video for herself or understanding exactly what Silver meant, and said she is not yet sure if her video will lead to punishment.

"When it comes to the women's programme, we are not so aggressive. If it's something to damage the country's reputation, then we take a different approach, but I haven't really heard it for myself, to speak about reprimanding her."

The Reggae Girlz will play the final round in Group B next month, along with Canada, Costa Rica and Cuba in Hidalgo, Texas.