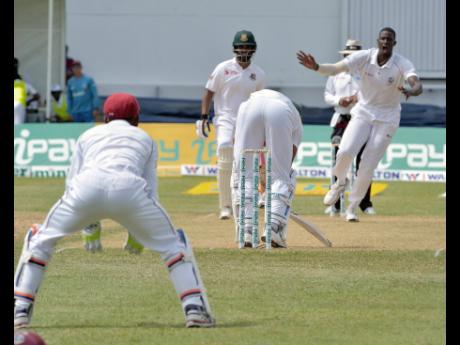 File Windies fast bowlerJason Holder (right) reacts after snaring a Bangladeshi wicket on the second day of the second Test match between the Windies and Bangladesh at Sabina park on Friday, May 11, 2018.

As a long-standing West Indies cricket fan, I am getting increasingly depressed with the current state of our cricket, especially at a time when teams like old beating stick England appear to be flourishing to the point where they recently spanked the powerful Indian team 4-1.

With an exciting array of very good young talent, England are now far removed from the times in the 1980s when we would 'blackwash' them, even in their own backyard. Now, just over three decades later, they have become such a formidable unit that I doubt we would be able to escape a 'whitewash' if they should push hard against us.

In looking at the positive transformation of England's cricket over recent years, in comparison to our steady decline over the same period, I believe the biggest difference is in the area of administration. While the English Cricket Board (ECB) appears to be a settled organisation with clearly developed plans, Cricket West Indies seems to be on an endless path of trial and error.

With long-standing opening batsman Alaister Cook recently bowing out of test cricket with a masterful century in the last test match against India, England has very few players who are looking towards the so-called departure lounge at this time. In fact, the core of the present team should be around for another four or five years.

It could be argued that the since the current Windies team is fairly young, we could get away with saying we are in a rebuilding phase and things should get progressively better in the next few years. Unfortunately, I can't subscribe to that view as while countries like England and India have high-calibre young players, our young players are doing very little to inspire confidence.

With gifted youngsters like Ollie Pope, Keaton Jennings, Tom Curran, Liam Dawkins and Sam Curran either already in the England team or knocking at the door and seasoned campaigners Joe Root, Jonny Bairstow and Jos Buttler all seemingly in their prime, the England selectors must be at a happy place mentally.

Conversely, the young players the West Indies has been investing in are not exactly cutting it and in some cases, their longevity in the team appears dicey at best. I am sure the selectors would have been hoping that players like Jermaine Blackwood, Sunil Ambris, Royston Chase and Kieron Powell would have been much further advanced in their development by now.

With the senior players such as skipper Jason Holder, Kraigg Brathwaite, Kemar Roach and Shannon Gabriel really no more than average players, it would appear that our only real hope is in wicketkeeper batsman Shane Dowrich, Shai Hope, Shimron Hetmyer and Alzarri Joseph, who are promising but still far from world class.

Jamaica, which was once a highly favoured nursery for West Indies cricket, has become so weak that we merit no more than the occasional 'one pick' for matches we are getting these days. To make matters worse, our young players are seemingly more interested in playing T20 than Test cricket.

I am worried that we may never again see the days of producing class players of the likes of Lawrence Rowe, Michael Holding, Patrick Patterson, Jeff Dujon, Richard Austin, Jimmy Adams, and even Mark Neita, who, in his prime, would have walked into the current Windies team in blindfolds.

The West Indies team is to play the Indian team shortly, and while I am proud of my Caribbean heritage, I can't see myself rooting for Holder and his men. In fact, I am hoping that India's captain, Virat Kohli, performs at his best because when it comes to entertaining, he is easily the most exciting batsman in world cricket today, and I like to see great batting.