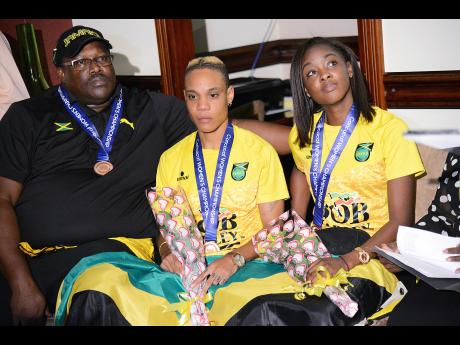 National senior women's football team assistant coach Andrew Price says the doubt that existed within the public about the Reggae Girlz's chances of qualifying for next year's FIFA Women's World Cup in France, actually spurred the team on to victory against Panama.

"When we started on this trek, it was called mission impossible, well (Wednesday) night we turned the impossible into possible," Price said. "Nobody would've thought in May, when we started this programme, on our quest to go to France 2019, that we would've achieved it, but we did it. We did it with dignity and we did it humbly (Wednesday) in Frisco, Texas.

"I want to thank the 'Doubting Thomases', because guess what, you motivated us, you inspired us to reach the heights that we have reached. We are thirsty for more success and it has only just begun."

Foster and Campbell agreed with Price.

Price went on to thank the public as well.

"I want to thank the entire public for the support, but, trust me, the euphoria hasn't really sunken in yet," he said. "It was a roller coaster, can you imagine taking the lead two times and (then twice) the (other) team equalises. But then we had the steely nerves because we knew we would not be denied. I want to thank the ladies. They really expressed themselves. There's a good camaraderie among the ladies in the squad."