Give rugby league a chance! - Monteith 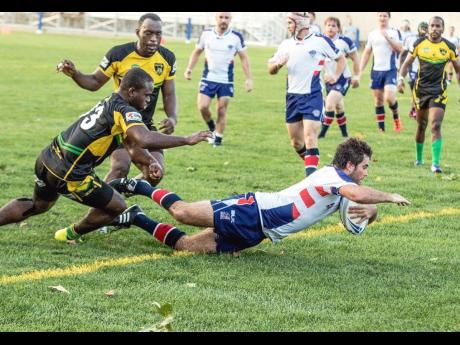 Jamaica Reggae Warriors' Leon Thomas (left) and Jermaine Pinnock attempt to prevent the US Hawks from scoring a try during a recent Rugby League game in Florida.

Jamaica Rugby League Association (JRLA) director Romeo Monteith says that the national team, the Reggae Warriors, can break into the top 10 in the world rankings, but it must start with more attention to the local clubs.

Monteith, and the Reggae Warriors, which he is also the head coach of, returned to the island after their 16-10 defeat of the United States in the Americas Championship final on Saturday. This gave them a historic berth in the 2021 Rugby League World Cup as the first Caribbean nation to qualify.

He said that if the team is to build on its recent successes, the sport needs the respect it deserves from the Jamaican public.

"We need coverage of the game in Jamaica too," Monteith told STAR Sports. "There are a lot of people who have put a lot of hard work into getting the sport up and running on the island -Paul Morris (former director of rugby) died in 2009. An Englishman who put us on the front foot, we have carried on his legacy from the founding chairman of the association - that's Mr (William) Masterton."

Monteith recalled the difficulty the JRLA received over the years in hosting local club matches.

"It's been a long road and people have laughed at us," he said. "People have said 'Where yuh going wid rugby league? What is that? Foolishness.' People have chased us off their field for football. I'm really just appealing to the government and Corporate Jamaica to get behind this programme and help to make Rugby League a genuine sport of interest in Jamaica.

Monteith said that he aims to make the team even more competitive by the World Cup in just under three years, but he wants the local players to further their development by then.

"I think (we can be) a world top 10 team," Monteith said. "With the talent that we have playing in the UK and on the island, I think so. So if the right resources come into play, there's a lot that we can do."

That, he said, would see more of them continuing to gain scholarships to play rugby at the collegiate level. He said that this long term goal would also see Jamaica qualifying for further World Cups in 2025 and 2029, and also improving its women's programme.