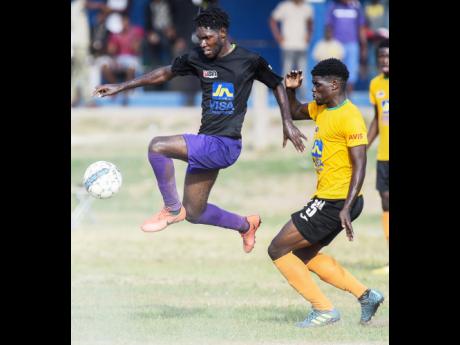 Molynes United's Ramone Rose (left) takes possession of the ball ahead of Tivoli Gardens' Barrington Pryce in the JN Visa/ KSAFA Jackie Bell Knockout match played at the Molynes playing field on Wednesday, March 7, 2018. Molynes United are one of the teams that will be contesting the 2018/19 KSAFA Super League. However, KSAFA has decided to boycott the new playoff system for promotion to next season's Red Stripe Premier League, which reserves a spot for the Super League champions. 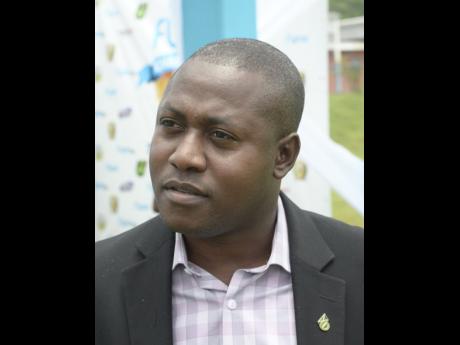 Bennett's comments regard the decision taken by the clubs at a meeting held last week to boycott the new structure of promotion to the RSPL, to be implemented by the Jamaica Football Federation (JFF) for lower division clubs next season.

The decision was reached after a lengthy meeting between KSAFA and its clubs set to contest the upcoming Super League season. The Super League is the division immediately below the RSPL, meaning the winning teams would normally go into an all-island play-off to gain promotion to the nation's top-flight league. However, the new structure would now see four teams from KSAFA, the St Catherine Football Association and the St Thomas Football Association play a mini- league. From there, the top team would then advance into the all-island play-off for promotion to the RSPL.

"The clubs in KSAFA view the move by the directorate of JFF as not in keeping with their best interest at this time," Bennett told STAR Sports.

Bennett said that the clubs of KSAFA see youth development as their primary focus, and while the RSPL provides the best showcase for talents to be scouted by overseas clubs, it is not the only option for them.

He said that KSAFA has "consistently" sought to have discussions with the JFF to re-evaluate their decision, but has not been given the opportunity.

"KSAFA has always had a relationship with the JFF because the president of KSAFA (Wayne Shaw) sits on the JFF board," Bennett said. "Other than that, we do not necessarily have any input in this but we are always willing to sit and discuss the way forward for football."

KSAFA also sought to deny the JFF's claims it has not received any formal communication from KSAFA about its objections to the new structure, by providing a letter it (KSAFA) wrote to the JFF in April 2017. It contains a petition against the new structure, signed by 33 of its 37 clubs. In response, former JFF general secretary Raymond Grant wrote to the KSAFA urging its clubs to reconsider their intention to withdraw from the RSPL.

"We would also suggest that your council seriously reconsider any 'mandate' it has received... "to take the necessary steps to withdraw all KSAFA Premier League Teams and form our own top-tier League,"" the JFF's letter said. "As you should be well aware, the JFF is the only body recognised by FIFA - with the mandate to manage, control and promote the development of the game in Jamaica and is the only body that can sanction referees and other officials' participation in any recognised league or affiliate football activity."