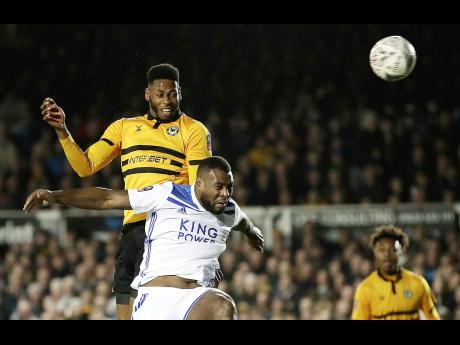 Jamille Matt came to prominence this week, even in the eyes of Jamaica Football Federation president Michael Ricketts, when his goal helped English Football League Two side Newport County to a famous 2-1 upset over former English Premier League champions Leicester City in the FA Cup on Sunday.

Matt, 29 years old, spent the first 10 years of his life in the St Andrew community of Maverley, just a few streets away from where Manchester City star Raheem Sterling lived before he also migrated to England. The youngest of three siblings, Matt fondly remembers playing football in his childhood with his father and watching Brazil games on television with him.

A past student of Obistan Kinder Preparatory School, Matt took part in its track and field and football teams. He ran at the JISA Preparatory Schools Championships but says he did not do well there. He joked that he would later realise football was his true calling.

"I was probably into athletics a little bit more," he told STAR Sports. "I played football with my dad when I was young but was more into athletics. The older I got, I was more into football. When I came to England, that's when I took more interest in football, because athletics isn't as big here as it is in Jamaica. That's kinda when the transition happened."

He said he did not think that football would become a profession for him, as playing started as a hobby and he then realised how well he could play.

"A couple of my friends wanted me to join their local team, so I did," he said. "It wasn't until I was 15/16, I went to a semi-professional youth team (Sutton Coldfield Town), and then from there, into their first team."

Matt grew up supporting Arsenal FC and club legend Ian Wright, who has Jamaican parents, is one of his favourite players. Wright was a television pundit for Sunday's game and spoke highly of Matt afterwards. While this pleased the Newport man, he admitted to being disappointed he did not get a chance to meet him afterwards.

"He was someone I always looked up to and somebody I wanted to play like," he said. "If I could be anything like him, it woulda be good even just, you know, the way he finished. He'd side foot the ball into the bottom corner, and that's what I used to model myself on. But I got a bit taller and was suited to play a bit differently, so I'm more of a target man. I had to evolve and play a different style."

Matt said he felt The County (as they are called) could have gotten a positive result before the start of the game, and it made him play without fear. He took inspiration from the previous season when they drew with Tottenham Hotspur, forcing a replay, which they lost late on. To get on the scoresheet, Matt had to outmuscle compatriot and former Jamaica captain Wes Morgan for his header on goal.

"To be honest, it's probably one of those things where he didn't know what hit him, because that's something that we kinda work on," he said. "I know how good (teammate) Robbie (Willmott) is, and as soon as he got the ball, I knew that if I got myself in a good position in the box, then I knew that he'd be able to find me.

"I set off to the back post because Robbie knows my strengths and I know his, so I knew where to be. So that was something Wes Morgan couldn't affect, because I got myself into a good position where he couldn't get back at me," he said with a chuckle.

He dedicates the goal to his two-year-old son and his aunt, Esther, whom he said was a big supporter of his career. She died two years ago, just a week after he signed for former club Fleetwood Town.

Be part of the history

Walking the streets of Newport has been even more of a joy to Matt since the win.

"Everyone I've spoken to after the game have just been full of praise and congratulations," he said proudly. "It's obviously nice to be part of the history and part of something the club has achieved. The club has been really good to me since I signed, and so have the fans. So I wanted to repay the faith they showed in me by scoring. It meant a lot to me, their support.

"I just want to concentrate just on football for the rest of the season and let it do the talking. If it brings international recognition, then that would be something I'm very happy about but I need to focus on the field before that can materialise."

Matt turning out in the black, green and gold of Jamaica is not a far-fetched thought, as Ricketts is not opposed to the idea.

"We have an open door policy and we want to ensure that at all times, we have our best players representing the country," Ricketts said. "It doesn't matter where they're from. We certainly want to have a look at whoever we think might be good enough and we need now, in certain departments, to strengthen our team, because we have a tough game coming up in Central America in March."

Matt wanted to face his favourite club in the fourth round of the FA Cup, however, they have been drawn at home against rivals Manchester United, while Newport travel to the Riverside Stadium to meet Middlesbrough FC.