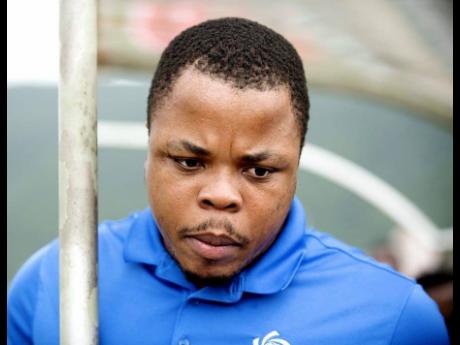 Fabian McCarthy missed a penalty in the 85th minute which cost UWI FC a vital point as his team went down 1-0 to defending champions Portmore United yesterday at the UWI Bowl.

But his coach Andrew Peart does not regret his decision to select the former Montego Bay United player as his side's penalty taker.

Portmore took the lead against the host in the 74th minute, thanks to Javon East penalty. This after going down a man in the 68th minute after Damano Solomon was red carded for a vicious tackle on midfielder Akeem Thenstead.

But the home team had a glorious chance to get a point from the encounter when Fabian McCarthy's powerful volley was blocked by the hand of a defender in the area with only minutes to go on the clock.

But McCarthy, who took the penalty, saw his kick saved by goalkeeper Benjamin Williams, much to the dismay of the home support. But Peart insisted he has lost no confidence in McCarthy, who missed a penalty earlier in the season against Harbour View.

"After the red card, it was a bad sequence for us to give up the penalty. Then after that it was us trying to get back into the game. We managed to do that because a penalty is a scoring opportunity and should be converted but not today," he said

"I am disappointed for it not to score, because he (McCarthy) is one of our big players, but if he should miss five consecutive penalties, I will still give him a next one. Ryan Miller is our other penalty taker and he was off. But we trust him (McCarthy) and if we should get a next penalty, if it is not Miller it is McCarthy.

"These are big players, the ones who have experience football at a higher level and we have to continue to trust them. We make mistakes all the time and some are more pronounced than others. But mistakes are part of the game and we made one today but we will bounce back from that," he added.

The win pushes Portmore to 59 points, eight points clear of Waterhouse, who play Arnett Gardens in tonight's game at the Anthony Spaulding Complex. UWI stay fifth in the standing with 42 points, seven behind fourth-place Cavalier, and one in front of Arnett Gardens.