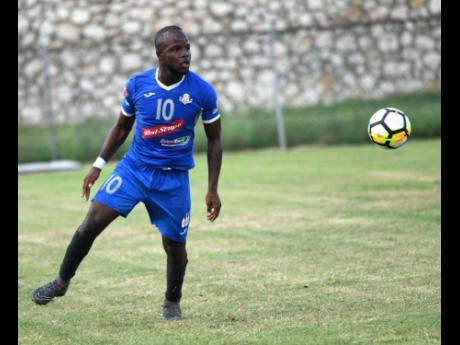 After a slow start to the 2018-19 Red Stripe Premier League season, Portmore United striker Javon East has reclaimed his prolific form, as he has found the net for his side Portmore United in their last four encounters.

East found the net against Cavalier, Reno, and Arnett Gardens, and on Sunday he scored the game's only goal as Portmore turned back UWI 1-0 to move eight points clear at the top of the table.

The goals takes East to 10 for the season and one behind leading scorers Fabian Reid of Arnett Gardens and Colorado Murray of Tivoli.

And although the race for the golden boot is getting closer with only four matches remaining in the preliminary round, East is not getting carried away with his recent form and is focused on working hard in training and taking it one match at a time.

"My good form now is just because I keep working hard after training. At home, I am also doing the extra stuff to help my game and do what I do best, which is help the team," he said.

Earlier in the season, the team relied heavily on Rondee Smith to provide the goals, but since the second round, Smith has struggled to find that form.

"Of late I have to double my work. I try to put the forwards under pressure, put the defenders under pressure, everyone from the top of the park to the defence, so everyone has to put in the shift, so I go home and do my homework, and it's paying off," he said.