Shelly not ruling out doubling at WC 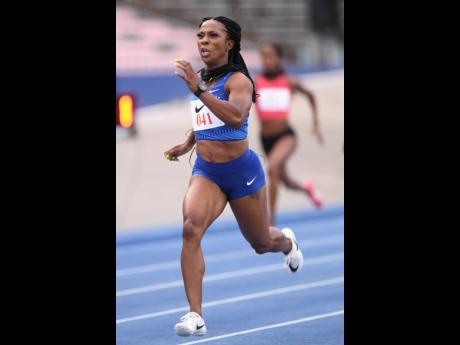 Multiple world and Olympic gold medallist Shelly -Ann Fraser- Pryce ran a 200m for the first time in three years, at the Nike Seniors Link Up Track Meet last Saturday as she fine-tunes preparation for the IAAF World Relays this weekend.

But her participation in the half-lap event could be more than just preparing for the 4x200m at World Relays as she admits that she has not ruled out taking on the sprint double at the World Championships in Doha in September/October later this year.

Fraser-Pryce surmounted the sprint double in 2013 when she stormed the Luzhniki Stadium in Moscow, Russia, sporting pink weaves.

And though she noted that a lot has happened since she claimed those two titles, she told STAR Sports that something inside her wants to be among the fast 200m runners. But the decision to run the 200 metres at this World Championships is for her coach Stephen Francis to make.

"Well 2019 is far from 2013 and as you would have noticed the girls are running fast (over 200m) and I would love to be part of that pool of athletes. It is still very early and for me I am not too worried," Fraser-Pryce said.

"The last time I ran a 200m was in 2016 at the National Championships and I did only one round. So today I am just really excited that I came out and run. I was a bit anxious and tentative because it has been so long. But I felt good. It was a bit windy but I was able to come out and execute and for me doing a lot more 200m always help me to do better in the 100. So now that I have gotten this out of the way, I am looking forward to running another 200m this time at the World Relays," she said.

Fraser-Pryce, who is the first Jamaican woman to win a global 100m title, will team up with reigning Olympic sprint double champion Elaine Thompson, Shericka Jackson, Shasha Lee Forbes and Stephenie Ann McPherson to try to win a gold medal for Jamaica in the 4x200m this weekend.

"I think it is a super team and I think I am privileged to be able to be on such a team. Elaine and Shericka are very good going 200m and Stephenie who is a 400m runner has a lot speed and so I am looking forward to being with the team and hopefully will can pull off a great race and take the gold medal," she said.

Fraser-Pryce and her teammates depart the island today for the Relays.