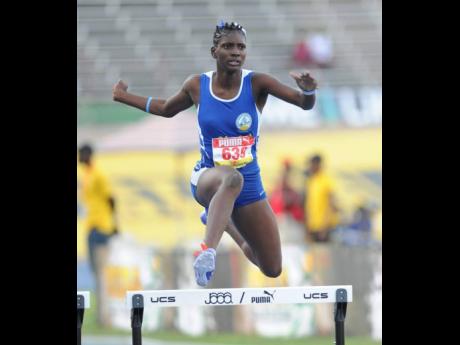 Shian Salmon has made an impact in her first year out of Hydel High School with a strong performance to win the Jamaica Inter-Collegiate title in her pet event, the 400 metres hurdles. Nevertheless, she is approaching this week's National Senior Championships cautiously. When the action begins on Thursday, her goal will first be to reach the final.

"It has not gone as smooth as I expected it to go," she reflected earlier this month on the transition from high-school athletics. "There is a bit of glitches along the way, but I've been overcoming them one at a time, and, hopefully, I'll peak at the right time and I'll get a place in the finals at the National Championships, and I'll take it from there."

She will face a field that includes some strong competitors. Nikita Tracey, Commonwealth champion Janieve Russell, Rhonda Whyte, Tracey's little sister Ristananna and Rushell Clayton have beaten the World Championships qualifying standard with times of 55.25, 55.28, 55.31, 55.71 and 55.83 seconds, respectively. Added to that group are 2016 Olympic finalist Leah Nugent and 2014 Commonwealth gold-medal winner Kaliese Spencer-Carter, who beat her 57.20x - 57.56 on June 1.

Ristananna was third at the 2017 World Championships in London.

Though the G.C. Foster College student athlete hasn't matched her high-school times, she has looked solid all season. At the Intercollegiate Championships, the 2018 Hydel High captain took the 400 metres hurdles in 56.66 seconds. In the flat 400, where Barbadian Sada Williams set a personal best of 51.71 seconds in the blue and gold of the University of Technology, Salmon chased across the line in 52.42 seconds.

Since then, she has covered the one-lap distances in 52.35 seconds, and her form earned her selection to the IAAF World Relays, where she ran in the 4x400 relay preliminaries.

Nevertheless, she appears to be on track, and the speed and hurdling techniques that made her successful at Hydel are still evident. "Yes, I'd say they are still there," she said. "But, as I have stated before, it's just that the transition from high school to the collegiate field has not been as easy as I expected it to be, so I'm just taking it a step at a time."