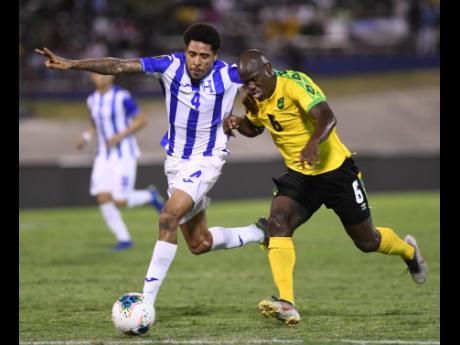 Jamaica senior men's football team go into their final Group C Concacaf Gold Cup game against Caribbean counterparts, Curacao, at the Banc of California Stadium this evening at 5 (7 Jamaica time), knowing that a draw will be enough to see them through to the quarter-final round of the tournament.

The Reggae Boyz, beaten finalists in the last two editions, currently lead Group C by virtue of goals scored, ahead of El Salvador, who they drew 0-0 with in their previous outing after beating Honduras 3-2 in their opening fixture.

Both teams have a plus one goal difference but Jamaica have scored three times and conceded two, while El Salvador have scored once and are yet to concede.So a draw for the Theodore 'Tappa' Whitmore-coached Boyz would be enough to claim one of the two qualifying spots from the group. But the Jamaicans will expect another difficult game from their Caribbean opponent, who sit on three points, one point off the leaders, after scoring a 1-0 win over Honduras in the last round of games.

Curacao, who defeated Jamaica for the Caribbean title in 2017, saw the Reggae Boyz turning the table to beat them at the Gold Cup tournament a few weeks later. However, after mixed performances over their two games this term, Whitmore will be demanding a lot more from his attacking players, who were impressive in their opening game against Honduras but lacked creativity and penetration against El Salvador, despite huge possession.

Whitmore, the former World Cup hero, will be looking for stronger performances from players like Brian Brown, Leon Bailey and Dever Orgill. While, there have been calls to include our most prolific striker in recent times, Darren Mattocks, or Shamar Nicholson, from the start.

The Remko Bicentini-coached Curacao will look to players like captain Cuco Martina, as well as a host of overseas-based professionals, including Gecaro Nepomuceno of Oldham Athletic, Elson Hooi of Den Haag in Holland, Shanon Carmelia of Dutch club, IJsselmeervogels and Leandro Bachuna of Cardiff City, to give them the upset win they will need over the Reggae Boyz to progress to the next phase.