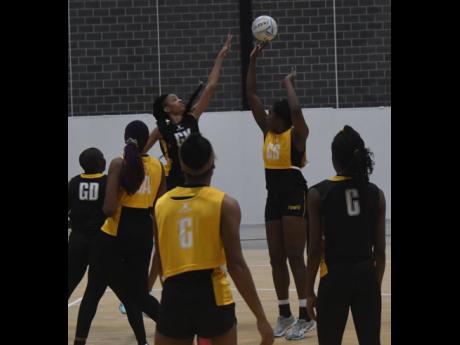 Sunshine Girls captain Jhaniele Fowler (second right) takes a shot on goal while challenged by goalkeeper Shamera Sterling, during a training session on Wednesday, ahead of their opening Netball World Cup game against Fiji today.

There is nothing but gold on the minds of the Sunshine Girls as they prepare to take on Fiji in their opening match of the Vitality Netball World Cup (NWC) tournament today at 11 a.m. Jamaica time.

Captain Jhaneile Fowler is beaming with confidence as the world's number-two ranked Sunshine Girls go in search of their first medal at the championship since 2007.

The Jamaicans have drawn a lot of positives from the fact they that won a bronze medal at the Commonwealth Games last year.

They also went on to outclass Commonwealth Games champions England 3-0 in their home series in Kingston last October.

The Sunshine Girls, who have never competed in the final of the Netball World Cup before, are seen as one of the strong favourites for the gold medal this year.

Fowler, who will be participating in her third NWC, told STAR Sports that they have worked very hard in their build-up for the championship and the team is very focused and determined to take home a medal.

"Twelve year is certainly a long time, and I believe that the girls are very hungry and they are determined to go out there and play well and to be on the podium at the end of the tournament," she said. "I know that we are very confident because we have the calibre of players that can take on any team on any given day. We have to beat every team to win this competition, because we have to come through every preliminary final and win the semi-finals in order to go on to the podium, and win the final as well."

The 29-year-old Fowler, who is rated as one of the top goal shooters in the world, said the Sunshine Girls coaching staff have identified their weak areas during their training camp in Manchester, so they are very prepared for the tournament.

"We have done a lot of work on the ending of our games and making sure that we are able to cross the line, or to finish off a game," Fowler said. "I believe that once we maintain our focus and discipline throughout the competition, then I know that we will be successful."

Fiji are ranked 17th in the world, and are not expected to offer much of a challenge for the Sunshine Girls.