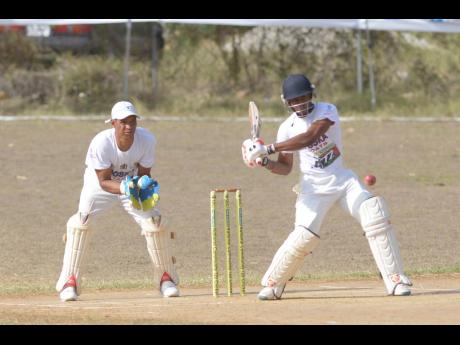 After going into Sunday's Social Development Commission (SDC)/ Wray & Nephew National T20 Community Cricket Competition with two wins from two matches and playing at home, Clarendon's May Pen Lions were expecting to seal their place in the quarter-final round with victory over St Elizabeth outfit Junction Ballards Valley.

But instead of looking forward to a place in the next phase of the tournament, they are staring elimination in the face after going down to Ballards Valley by 50 runs at the Sir P's Senior Cricket Oval in May Pen on Sunday.

Batting first, Junction posted 218 for four off 20 overs. Romano Davidson led the way with a blistering 83 off 25 balls. He was supported by Bryan Gayle with 55 and Andre McCarthy with 43. Sherwayne Dixon was the pick of the bowlers for May Pen with three for 23.

In reply, May Pen could only manage 168 for eight. Ferdinand Sappleton led the batting with 42. Brian Buchanan contributed 39, Glenroy Hutchinson 21, and Pandre Christie 20. Gayle was Junction Ballards Valley's top bowler with two for 23.

With May Pen, Junction, and Fairfield all tied on six points each from three matches, it will come down to the best net run rate to decide the top two teams from the group, and after yesterday's defeat, May Pen coach Steve Wallace did not feel too confident about his chances, while Junction's captain, Damion Ebanks backed his team to top the group after the win.

"The team came out and showed their worth," Ebanks told STAR Sports. "I thought we played some really good cricket, and the senior players came to the party in a massive way," he continued.

"We have been playing like this from season, although we played a bad game in Comfort last week. But the guys went back, and we set a plan and stuck to the plan. This (win) probably put us in the number one position, so it's really good, and as long as we continue to enjoy and support each other and play the cricket we know, we can go a far way," he said.

Wallace, on the other hand, was not as optimistic "We had a bad day. Bad batting, bad bowling. We were confident, but one man came and just started swinging his bat and made some connection and ended with 85 runs. And that kind of took the game from us. We allowed the team to get too many, and that put us under pressure, batting second," he said.

"SDC will have to do the calculation to see who goes through. Whatever decision they make, we will abide by it. But I am not confident because I don't know the method or the way they will use to calculate it.

"One side (Fairfield) was awarded points, and that is the only reason they qualified. I am not sure how it is going to work from here," he concluded.

SDC representative Junior Taylor said things look bleak for the Clarendon side but added that nothing is certain until the final calculations are in.

"The three teams are on six points, so it's the top two teams by best net run rate," he explained,

"My feeling is that it is Fairfield and Ballards Valley. To how they (May Pen) batted and what happened, if they had gone closer to 200, it would have been trouble for someone. But after will the final check, we will know who go through," he said.