Jamaica U-23 held by Dominica 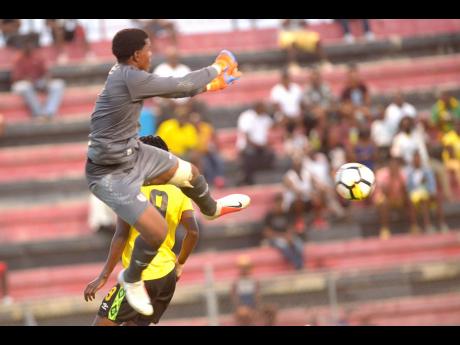 Dominica goalkeeper Elie Tafari (front) clears the ball, ahead of the approaching Tevin Shaw (not pictured) of Jamaica. 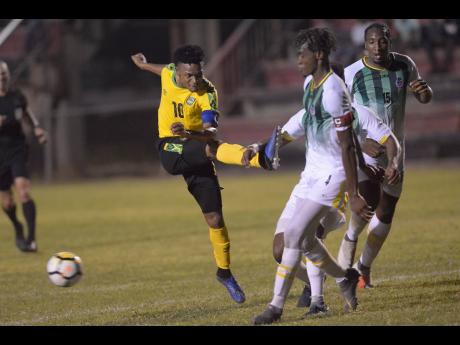 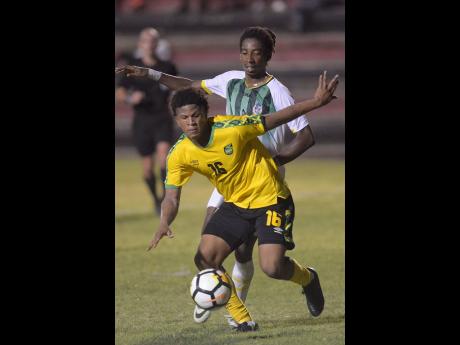 Jamaica failed to secure a win in their opening round Caribbean Football Union (CFU) Olympic qualifiers after playing to a disappointing 1-1 draw with Dominica at the Anthony Spaulding Sports Complex last night.

Jno Hope Tobi gave Dominica a surprise 1-0 lead in the 37th minute, but Nicque Daley secured the point moments (52nd minute) after coming off the bench in the second half.

Jamaica dominated the first half and had some great chances through Deshane Beckford and Daniel Green, both of whom had multiple chances to put them ahead.

Green did put the ball in the net in the 33rd minute but it was ruled out for offside.

Dominica then took the lead on their first real attack when Jamaica failed to clear the corner. Tobi scrambled home the opener from six yards out.

But Jamaica were on level terms minutes after the break when Daley redirected captain Alex Marshall's cross.

Daley then had two great chances to put his team in front but he kicked wide, and then tamely to the goalkeeper.

The Young Reggae Boyz pressed their opponents for the winner at the death, and Marshall and Lamar Walker were not far off target.

Jamaica coach Donovan Duckie said the Dominicans' defensive set up made it tough for them to score.

"They played in a deep lock and it is always difficult playing against a deep lock," he said. "We were dismal in front of goal. We had a few chances we could have converted, but it didn't happen for us. But the goalkeeper for Dominica was brilliant."

The result means Jamaica and Dominica are level on a point each, with the latter set to play St Kitts and Nevis on Friday in the next game of the three-team group. That game takes place at the same venue at 4 p.m. Duckie's team plays its final game against St Kitts and Nevis, also at the Anthony Spaulding Sports Complex on Sunday at 6:30 p.m.