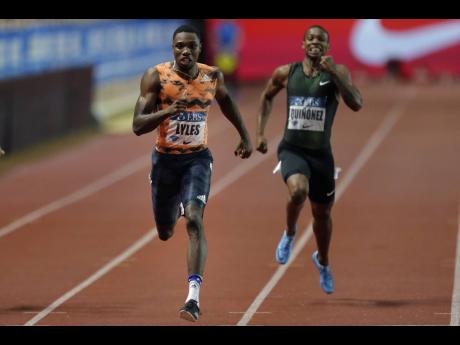 Noah Lyles, the second-fastest man over 100m this year, won't be running that event at the IAAF World Championships when the event starts in Doha, Qatar, on September 28. That's because the young American has chosen to focus on the 200m and has not entered the halved distance at this week's US National Championships. It's a decision that may make the rest of the world's 100m men breathe a little easier.

His compatriot Christian Coleman leads the world at 9.81 seconds, with Lyles, the 2016 World Under-20 100m champion, and Nigerian Divine Oduduru tied at 9.86 seconds and reigning champion Justin Gatlin at 9.87 seconds. The third-fastest American, Chavon Gillespie, and South African Akani Simbine have both run the distance in 9.93 seconds.

Lyles has lost to both Gatlin and Coleman in the 100m this year and was concerned about running the rounds of both sprint events this week and in Doha.

"I need to know that I can run three rounds of the 100m at 9.8 or faster and then still be able to come back the next day and run three rounds of the 200m," he said in an interview quoted by the NBC Sports website. "Until I can see that, I don't think there's too much of a reason this year to do it," said the youngster, who is coached by Lance Brauman, who guided Jamaica's Veronica Campbell-Brown to two Olympic gold medals in the 200m and a World title in the 100m.

"I feel that it's very risky," Brauman said, analysing how he might handle three rounds of the 100m and three more in the 200m at the US Nationals and the Worlds.

Lyles is the favourite for the World 200m title after a big run in Lausanne, Switzerland, on July 5. The 22-year-old American clocked 19.50 seconds to become the fourth-fastest man of all time.

Only Usain Bolt, Yohan Blake and Michael Johnson have ever gone faster.