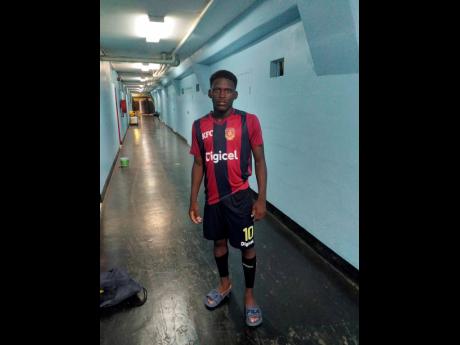 St Andrew Technical High School's Shamar Daley, who netted a brace in his school opening Group B ISSA Digicel Manning Cup quarter-final game against Excelsior last Wednesday, has been in excellent form for the Spanish Town Road school since the end of the first round.

The attacking midfielder was instrumental in his team's two way second-round tie win over Eltham, and against Excelsior he copped a match-winning display with two of his team's four goals.

The diminutive playmaker told STAR Sports that he believes he is one of the competition's most creative player and one to watch this season.

"I am Shamar Daley, the man to watch," he said when STAR Sports caught up with him after the Excelsior game. "I want to show that I am one of the most creative players in the competition and along the way help my team to win this Manning Cup. Each game, I have been performing better and better and now I have prove myself to everyone."

The attacking player says he expects his team to continue to perform well and he is putting it on himself to make sure that happens.

"I think my performance (Excelsior) was quite fair. I started playing (well) late (in the game), but when I got into the game, I did what I had to do to bring my team the victory. But to go all the way and win this Manning Cup we need to train harder and listen to the coach and everything will work out," he said.

"My team will rely on me to win games, and most definitely I will be looking to get some more goals and help my team as best as possible to win the trophy," he said.

St Andrew Technical lead their quarter-final group with three points, followed by Jamaica College and St George's College with one point, while Excelsior are at the bottom without a point. The Manning Cup quarter-finals are schedule to continue on Tuesday.