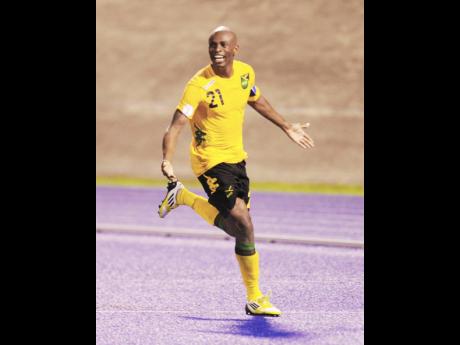 A message was posted on the former Harbour View striker's Instagram page expressing his delight at still being alive a little over a year after he was diagnosed with amyotrophic lateral sclerosis (ALS), or Lou Gehrig's disease, a progressive neurodegenerative disease that affects nerve cells in the brain and the spinal cord.

The national senior men's all-time leading scorer thanked all who have supported him throughout his ailing.

"The best thing happen to me this morning is that I wake up to celebrate one more year of life and blessings," the post read. "I know everyone might be wondering how I am doing ... well not as great as I want but really I give thanks because it could be worse. Thank you all for blessing and support."

The 34-year-old Shelton was diagnosed with the illness in the summer of 2018, over a year after he was injured in a Red Stripe Premier League (RSPL) game for Harbour View against Tivoli Gardens at the National Stadium. But he has been fighting to combat the illness and has received an outpouring of support from the local football fraternity, Government, and wider Jamaican society.

His support included financial contributions to assist with medical expenses. However, for a number of months, the former striker, known for his pace and finishing, has been out of the public view, leaving many to question the extent of his condition, especially after he also lost his father, Luton Shelton Sr. The elder Shelton was key in generating support for him before passing in hospital in May of this year after collapsing at home.

STAR Sports reached out to Bobbette Shelton, his wife, for an update on his condition but her phone went unanswered.

Shelton represented Wolmer's in the Manning Cup and played locally for Harbour View FC and overseas with the likes of Sheffield United in the English Premier League (EPL), and Valerenga (Norway) in the European Champions League. He also had stints with Helsingborg (Sweden), Karabukspor (Turkey) and Volga Nizhny Novgorod (Russia), and scored 35 goals as a Reggae Boy. Shelton also holds the Bundesliga two record in the 40m dash with a time of 4.59 seconds.