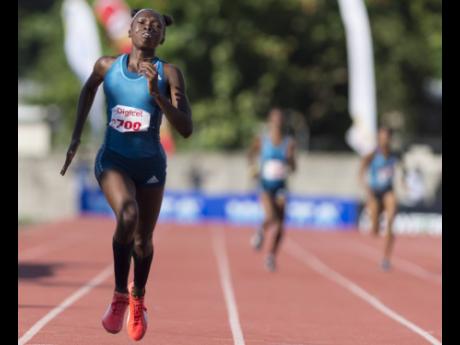 The more Shaquena Foote runs the 400 metre hurdles, the more comfortable she becomes with the event she first tried last year. After an assured title defence at the STETHS Invitational on Saturday, Foote said she is more familiar with the event now. Her coach Machel Woolery says it is an event she will target for this year's World Under-20 Championships.

The outgoing Petersfield High School athlete ran easily to repeat her 2019 STETHS victory in 61.19 seconds. When she stepped off the track, she reviewed her effort. "It was good, although I couldn't really see the lanes, it was a bit pale so I wasn't sure which lane I was running in," said the reigning 400 and 400 hurdles Carifta Games champion.

Her coach was also pleased with the effort, despite the early starting time of the event. "It's a bit early in the morning for a 400 hurdle race, but she looked pretty smooth," said Woolery, who is overseeing Foote's third race in the hurdles this season.

Marked by a mistake

Her first season in the event was marked by a mistake at the first hurdle that left her well down the field at Boys and Girls' Championships. "Well, feeling very good because I know that I'm coming back to my normal Shaquena Foote," she said." It's feeling very familiar now."

Though her last ISSA/GraceKennedy Boys and Girls' Athletics Championship arrives at the end of March, the coach says her big target is the World Under-20 Championship in July. "We are trying to take it slow this year and our real focus is for World Juniors so we're trying to get it right from early," he explained.