What's the big deal about PEP? 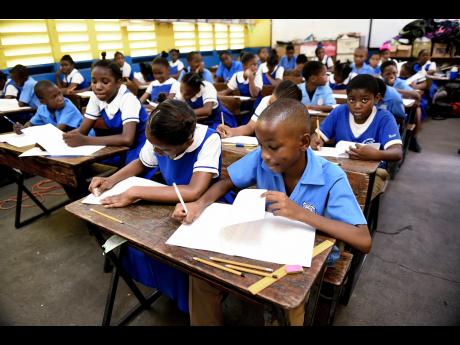 You know, I am all for change. Yes, it is difficult to accept sometimes, but eventually you get used to the idea, and change then becomes tolerable.

Tolerance then leads to acceptance, and then all is well again.

However, as a father of an A student currently in prep school, I am wondering why there needs to be a change from the Grade Six Achievement Test to this new Primary Exit Profile (PEP) thing that is being introduced to the primary-school system come the new school year.

For all the changes that have been made over the years, I don't see where children these days are any smarter than they were when I was doing the Common Entrance Examinations an eternity ago.

Yes, I know children these days seem to be born already wired into the Internet. I marvelled at how quickly my youngest son adapted to an iPad his aunt gave him one Christmas when he was about three years old.

Within weeks, he had mastered how to use it to access videos on YouTube, and it wasn't long after that he began to make videos of himself discussing the different toys he got for special days like birthdays and Christmas.

The exposure to the Internet, I believe, has made him more aware and very articulate, and I am a happy dad.

That being said, I don't know if my generation was much different in terms of our intellect. I had to go to the library and read through the Encyclopedia Britannica to get much of the knowledge I now possess.

But I would also read any and everything I could get my hands on. That helped me through prep school and high school and in college, too.

Why? Because I used the knowledge I gained over the years through reading.

Children these days are more exposed to cyberspace, but I find that they are much more ignorant of many things, including basic things that I took for granted when I was growing up even though that information was harder to come by.

How PEP change anything, I don't know. You assess the kids at grade four and later on in their primary education, but I am not sure how that helps anything.

Children who I know used to be 'dunce' in prep school are considered among the brightest minds in their respective fields today. I don't know how PEP can solve that.

I would suggest an overhaul of teaching methodologies to target children who learn in one way, group them together, and provide them with the tools they need to learn.

Those who learn by traditional methods can stay together and develop that way. In the end, everybody wins.