We are too nasty 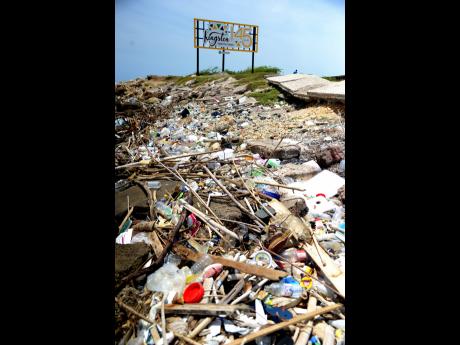 Garbage washed up along the Kingston Harbour.

Every single day that I am on the road, I witness someone - a taxi driver, a passenger, a pedestrian - toss plastic bottles, paper and plastic cups, paper, plastic wrappers, and glass bottles on to the streets or into drains.

It is sickening to see. I even began taking pictures, but after a while I deleted them because, in truth, what is that going to do?

I can't change this country by myself. For years I have been writing about the things that we do wrong in this beautiful country, and nothing changes. Most of us go about our business each day, caring little about how much our actions and inaction are destroying Jamaica.

So now, as things tend to do when we turn a blind eye, someone from abroad brings our attention back to things that should matter. European Union Ambassador Malgorzata Wasilewska put the issue back on the table this week.

"What we see as outsiders is that there is plenty of work to be done here. It was a massive shock to all of us arriving in the country to see the massive amount of plastics and rubbish in the beautiful forest," she said.

"You have nature like nowhere else in the world and everybody comes to admire it, but as a society there is a responsibility to look after it better because despite the fact that Jamaica is beautifully located and the richness of the vegetation is fantastic, it will not be forgiving forever."

We should be embarrassed that it takes a diplomat to break protocol and give us a dose of reality about how we are as a people and how we take care of our home. We might be poor but we must take pride in where we live.

As a child, I would sometimes accompany my grandmother on her visits to some of her neighbours, who were poor farmers. What was telling, however, is that despite the rags they wore, despite the dilapidated nature of the houses, inside was always immaculate. The wooden floors were polished shine with red wax. The furniture was properly dusted and the figurines were clean and shiny and neatly placed.

They were poor but they took great pride in where they called home. Isn't it about time we start to do the same?