My heart is full of love — Bounty Killer 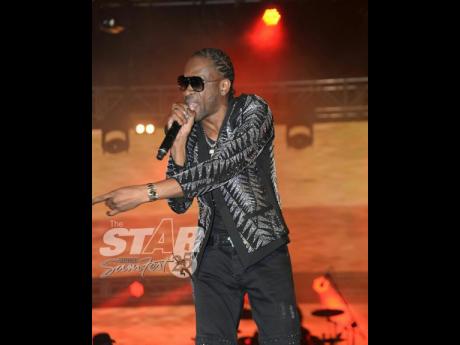 Veteran dancehall artiste Bounty Killer is insisting that he has a good heart despite his cross, angry and miserable mannerism.

Bounty Killer, in an in interview with Nikki Z at Reggae Sumfest in Montego Bay, St James, said that when he leaves the entertainment business he wants to be remembered for "the goodness of my heart".

"I wear the dark glass and the black suit so I look bad, but I am a good person," he said.

Bounty Killer describes himself as "a dark character with a bad image".

"They gave me the image of the bounty killer, the warlord. That doesn't sound like a nice thing so people come look for a warlord and a bounty killer," he reasoned.

However, Bounty Killer, whose given name is Rodney Pryce, insists that "my heart is all fun and joy and love and care".

"I want people to know that Bounty Killer is a good man with a bad image and character. but not a bad personality. The Bounty Killer character is a bad thing. I am the best bad man," he said.