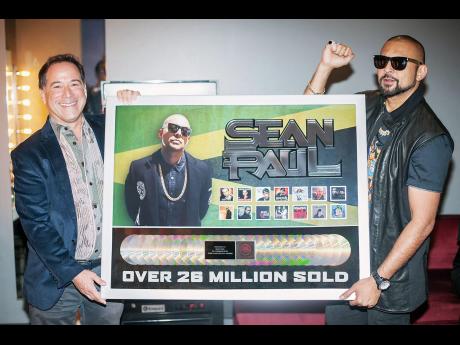 Recording artiste Sean Paul receives an award from the Recording Industry Association of America (RIAA) for records sold in the US only to date. This plaque represents Sean Paul certified sales of albums and singles. In the last year alone, he had "Cheap Thrill" four- times platinum and "Rockabye' two- times platinum in America alone! 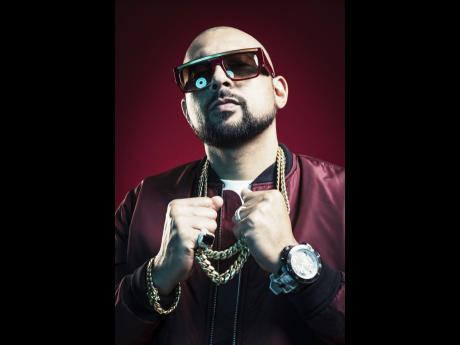 International superstar Sean Paul says people must follow their heart and be true to themselves if they are going to be successful in their vocations. The platinum-selling artiste, who was last month gifted a plaque by the Recording Industry Association of America (RIAA) for selling more than 26 million records in the United States, said that success in the music industry comes when aspiring artistes follow cues versus rules.

"I've never been a leader to be like, 'Yeah, follow me - do this.' But some people could take tips from how I do my tings, I'm sure," Sean Paul said.

"I've been successful in performing for international crowds, presenting dancehall - especially dancehall/reggae to people. But I think everybody has a different path in life - people could learn from me because everyone performs different also," he told THE STAR.

Sean Paul's success was one of the big stories in music last year. The artiste enjoyed a prosperous year on the Billboard charts, thanks to his successful collaboration with international superstar Sia on Cheap Thrills and Rockabye by Clean Bandit.

Asked what advice he would give artistes who would want to achieve millions in sale, Sean Paul said he "can't really tell people what to do". However, the Gimme The Light artiste nonetheless offered counsel, to persons who are seeking similar success.

"I think that everyone should look at the positives people achieve and try to do their best to get to that position or to get into a situation like that. But everybody story is going to be different. I can just say follow your heart, follow what you know - what you feel to be real, no matter if people tell you your work is too simple or it's too complex," Sean Paul said.

"Just follow your heart and that's what art is really about. It's about following your heart and creating beautiful things that maybe other people didn't see or think of before."

In addition to being recognised for racking up 26 million records in sales, Sean Paul also received platinum plaques for his 2003 mega hit single Get Busy, 2005 chart-topper We Be Burning and for his single Temperature, which has been certified three times platinum. Only five other Jamaican artistes, Shaggy, Damian 'Jr Gong' Marley, OMI, Cherine Anderson, and Ini Kamoze have platinum certification in the United States.

"I'm very proud of the way that I've performed and that I'm able to present our music to a wider audience, and 26 million sales represents to me dedication over the years. It means also fans' involvement. Without their support, I couldn't be here. I just have to big dem up," Sean Paul told THE STAR.