Kawyla-Jay dreams of being an international artiste 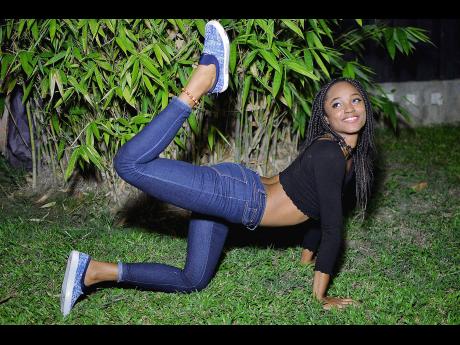 She's hot, young and fiery. Her name is Kawyla-Jay, and she insists that there is a space in dancehall for her musical talent and charisma.

"I can go up against the big girls and be counted, but that is for another chapter in my dancehall life. For now, I'm just focusing on giving the lovers of dancehall and reggae music quality material to absorb and savour," said the bubbly artiste.

She has every reason to be happy, as her brand new single, Dreaming, is already creating a buzz on the streets even before its official release. The song is produced by her brother, Davion Hemmings.

In Dreaming, Kawyla-Jay, a former Magnum Kings & Queens of Dancehall contestant, expresses her desire to be filthy rich. She boasts about being successful in life and spend excessively on partying, buying expensive cars and accessories, and defeating the monster called 'poverty'.

"Honestly, my brother and I were at home, and we were debating why so many female artistes do so much raunchy songs to be recognised, and I want to be different. We are dreaming big things around here. I want to push my music and be successful," she said.

Meanwhile, Kawla-Jay, whose real name is Juzel Hemmings, said that the Magnum Kings and Queens of Dancehall competition has made her into the artiste she is now.

"When I was in the Magnum competition, it was very stressful. I had to be campaigning on the road and writing lyrics and rehearsing to stay sharp and focused. It was a lot of work, but it paid off in the end," she said. "The show grew me. It made me come out of my shell. Now, I want to explode and show the world the real me. I'm seeing myself in a couple years as this big international artiste, touring the world, shopping at the stores and dining at posh restaurants and being a great ambassador for Jamaica," Kawyla-Jay said.