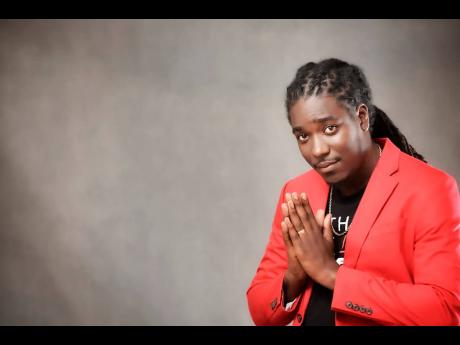 In his quest to unify the gospel community, Di Anointed Vale set out on a two-year project that yielded his sophomore album, ' The Collab'. Released last month on his Blood a Jesus record label, the set hosts eight features of 12 tracks, which he said are the result of tedious work.

"There is a lot of segregation in the gospel industry that I don't see in the secular industry because everybody feels as though another person is competition, as opposed to a brother uplifting another," he told THE WEEKEND STAR.

"I wanted to do a project that includes different artistes from all over the world with the vision of letting people understand when we come together, we can be greater. I wanted to have 12 artistes on the album but ended up with eight, which showed me how divided and self-centred we are, where if it doesn't benefit someone or if you don't esteem an artiste in your category, you won't work with them. I also understand most artistes are busy, so trying to get artistes to drop eight bars can be an issue at some point. It was really a huge challenge, but thanks be to God, it came out the way it did and, I believe how God wanted it to be."

"I poured my heart into it, and I believe with the togetherness on this album, more than just the awards, much more lives will be touched by the ministry and music," he said.

"I have taken it a step further by contracting VP Records to do my distributing, so I believe this album will go far and be a success."

Vale is from Portland soil and honed his talent at the Edna Manley College of the Visual and Performing Arts. The local industry, however, was a tough place for the musician when he started a recording career in 2012.

"Jamaica is not one of the easiest place to 'buss'. I learnt that there is a particular circle you have to be in, and if you're not being featured by a particular station or artiste, you won't be in the limelight, no matter how talented you are," he said.

He left Jamaica in 2014 and now resides in Guyana, where he kick-started The Collab tour recently.

"I think migration is what caused me to be more popular in the Caribbean; most of my bookings are from other Caribbean islands and the United States than Jamaica," he said.

"The saying that 'a man is never honoured in his own country' is a real thing, but through my ministry and music, my name is growing, and from the last year or so, I've been getting more bookings for Jamaica," he said.