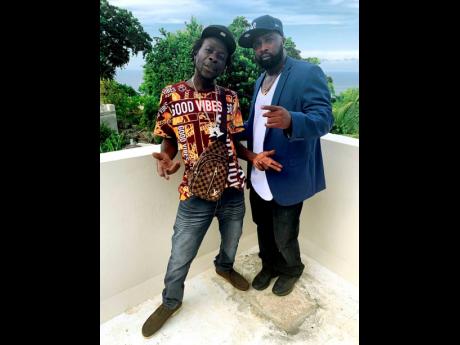 New York-based producer Bobby Johnson, CEO of Ubigwitus Records, says he believes Trench Town recording duo Richie and Ragga have what it takes to be the next big acts in reggae. The Jamaica-born producer, with more than two decades of musical experience, told THE STAR that he knows talent when he sees it and will be doing everything in his power to ensure both entertainers go all the way.

"A friend of mine name Leroy Crooks came to me and brought Richie and Ragga and I wasn't really thinking of doing music with them at the time but after hearing them, I saw that they had real talent. They had quality music, concept-wise and subject matter," he said. "Their music matched my vibe as a producer because I am not into the negativity, and their music is positive and uplifting. Richie and Ragga are different. Their music is good and right now is the time for reggae and the time for them."

"I have 100 per cent faith in their talent. I spent quite a bit of money on them already, producing and promoting and shooting videos and so on. I wouldn't invest in people I don't believe in. From an international standpoint, they have the sound and the style," he continued.

Johnson, who is expected to drop his latest album in the next few weeks, says both artistes are featured on the compilation and believes they can go as far as the Grammys.

"The album is called 'Rags to Riches' and I'm really going hard on this album. My aim is to get the attention of the Grammys. We really want that and we're gonna do everything possible. When people listen the album, they'll see that it really has potential. We wanna hit the Billboard charts and accomplish everything there is to accomplish," he said.

An overwhelmed Ragga told THE STAR that if the album were to make it to the Billboards, that would change his life.

"Working with Bobby has been great. We put in a lot of hard work on this album and so we expect good things. To me, it's certainly gonna be a Grammy album and that will change my life. Living in the ghetto and getting a link like this is a dream come true. I respect and honour everything Bobby doing," said Ragga.