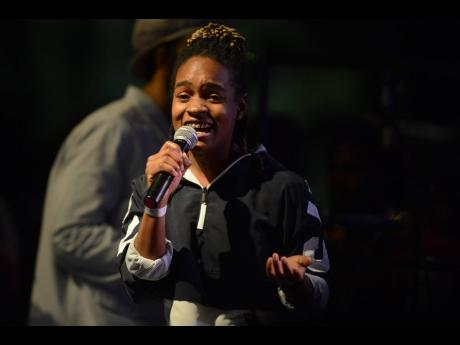 At exactly 4:50 p.m. on Sunday, the selector who was pumping some heavy dancehall basslines, sending bodies gyrating in sync at the Kingston Creative Artwalk, paused mid-beat to make an important announcement - "We have some breaking news. Koffee is the Grammy winner!"

Immediately, the crowd on Water Lane in downtown Kingston broke out in loud cheers and quickly jumped back into position, this time to dance vigorously to Koffee's Toast.

That was quickly followed by Rapture and then W.

"It's all about Koffe right now," the enraptured selector shouted over the mic, and it really was.

Dale Beale, an aspiring photographer, told THE STAR that he felt proud.

"To think that she's that young and has put in the work and gave us clean music that can still resonate. I'm glad that the Grammy people saw it fit to listen to her music and reward her," he said.

"I feel wonderful! Excited! One lickle 19-year-old Jamaican girl take on everybody and win. Amazing!" an enthusiastic Paulette Rose said.

"She win! I am elated. For her to just come on the scene and do reggae the way she doing it and get a Grammy is a great achievement. Overseas taking this thing away, enuh. We have to preserve it," she said.

Up-and-coming singer Shakti Nefer was "really ecstatic". She added that she was happy that Koffee represented for the females in such a dominant way.

For fine artist, Bryton Brown, the win was amazing.

"This is her first time and she went up against veterans and won with an EP. This shows that there is still a space for good, wholesome lyrics," he told THE STAR.

Koffee became the first solo female artiste to win in the reggae category when her debut five-song EP, Rapture, picked up the gong at the 62nd Grammy Awards held at the Staples Center in Los Angeles.