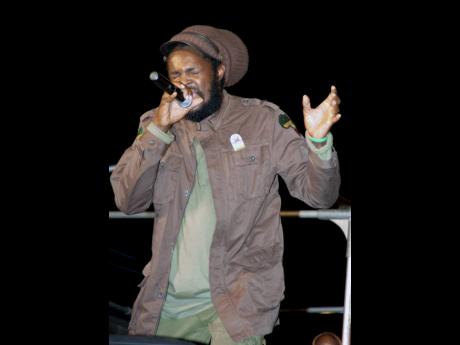 As the song progressed, it was clear that this was another one for the history books, with the artiste chronicling his many accolades over several years.

Without seeming to pause, Historyman found a new gear and chants "Bob Marley story," and his audience obediently repeats after him, as he took off into a fast-paced performance detailing the reggae legend's story.

The artiste easily reeled off a date-by-date account of Marley's life, from his birth to his death, and several milestones in between. Patrons were thrilled.

Post-performance, THE WEEKEND STAR caught up with the 'walking encyclopedia', who distinguished himself as an artiste with a difference when he started putting the historical information and biographical material of various reggae icons to music.

He admitted that while he gets shows overseas, he rarely performs in Jamaica.

"Culture events like this or schools, or the Marcus Garvey organisation, those are the people who will call. I did Rebel Salute two consecutive years. The first time was right after Obama win the presidency, but not since," Historyman said.

A former Tastee Talent Trail winner, he believes that he is not in demand locally because he doesn't "write and sing gun song or sing about under woman".

Hence the title of his most recent song, Low Mi Mek Mi Gwaan, a feisty ditty aimed at selectors and disc jocks who have been ignoring his music.

That song, he says, is the first single from his soon-to-be-released album, Time and Patience, which he has been working on for three years.

The self-produced album, surprisingly, does not contain any historical data. "These tracks are really for the heart. Palpitation and arrhythmia are two abnormal functions of the heart, so it's to soothe the heart, instead of the usual informative pieces," he said.

He said, however, that before the year ends, he will be releasing Chronology Volume 2, the follow-up to his 2001 Volume 1, which taught the history of Marcus Garvey, Miss Lou, the then 43 US presidents, and the then seven Jamaican prime ministers.