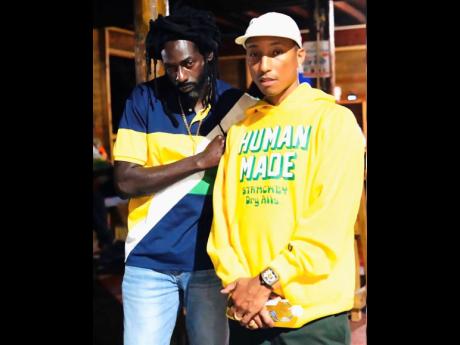 Buju Banton (left) shares this picture of himself and Pharrell Williams with his one million followers on Instagram.

This was first revealed at Tuesday's Jamaica Reggae Industry Association Awards at the Little Theatre in St Andrew.

Buju, who recently inked a partnership with Jay-Z's Roc Nation, and Island Records, was being honoured for his 'Exceptional Contribution to Reggae Industry' in the songwriting category.

However, he was absent from the event, and the reason given was that he was in studio working with the renowned Williams.

A representative, his co-manager Donovan Germain, collected the award on his behalf. But Germain refused to give any details on the project when THE STAR reached out to him.

But since then, Buju has shared a picture of himself and the Grammy award-winning singer, rapper, songwriter, record producer and entrepreneur, with his one million followers on Instagram.

It was confirmed earlier this year that Buju, given name Mark Myrie, was working on an album to be released in April, some 10 years after his last album, Before the Dawn, which won the Grammy award in 2010.

Germain, who is also the producer and CEO of Penthouse Records, was quoted in an interview a few weeks ago saying that the album was just about complete, and that it would be a multi-genre project, rather than just catering to the reggae and dancehall core audiences.

Of the album, Buju said in an interview last year that it would be "something different, to educate, uplift and stimulate".

He told radio personality Ebro: "Most people who listen to reggae music have a different level of knowledge; we call it common sense. This album is going to be riddled with life experience, my experience."

Germain has stated that Buju would not be entertaining any interviews until after the album's release.

"When the album is out, then Buju will start doing interviews because at least there is something to talk about other than prison," Germain said.

Since his release from prison, Buju has put out a number of singles, including Country for Sale, Steppa, Trust, and has been featured on DJ Khaled's Father of Asahd album in a collaboration with Sizzla, Mavado and 070 Shake, titled Holy Mountain.

The Dave Kelly-produced Trust captured the imagination of his target market and claimed the top spot and top five placement on the iTunes reggae chart for weeks.