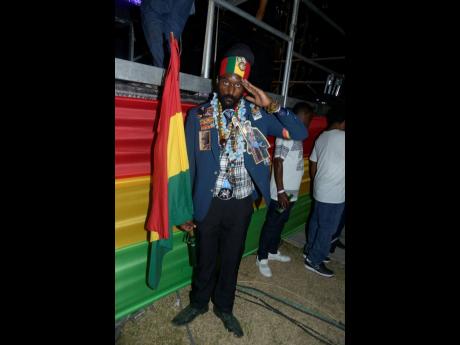 Many reggae and dancehall fans are sure to know Fyah Stone by sight, if not by name.

He is the always serious, militantly attired Rastafarian who accompanies Capleton, Luciano, and a few other artistes on stage, vigorously waving the red, green, and gold flag.

He never pauses, and is so focused that he doesn't seems to breathe. Fyah Stone prefers to be called a 'banner man', and he tells THE WEEKEND STAR that the job was passed on to him by another artiste.

"I used to carry the water for the artiste dem, but at Saddle to the East, Munga [Honorable] passed this job on to me and tell me that this going to bring me through," he said. "After him pass it on to me, the first show I did was in Skateland with Ninja Man, and from there, Fantan Mojah come in. I do a video with Chuck Fender and Determine and then a lot of other artistes see me and want me to be part of dem video," he said.

Totally dedicated to his duty, Fyah Stone described his work as "a joy and a fun" and stated that it has allowed him to travel internationally.

"I tour two times in my career. I go Europe and Trinidad and wave a lot of banner for international artistes. I a tell all di bad man dem that if I am a banner man and I go foreign and wave, dem can do it to," he said, adding that he also does much work in Jamaica.

Fyah Stone told THE WEEKEND STAR that waving the banner is a sign of honour to Emperor Haile Selassie, and the work of the banner man is vital.

Fyah Stone has been doing this job for at least 10 years and he has no intention of slowing down.

"Mi still have a lot of ground left to cover and continue the work with Capleton and all the artistes dem who me work with. Respect to Munga," he said.