Flames of love from Anthony B 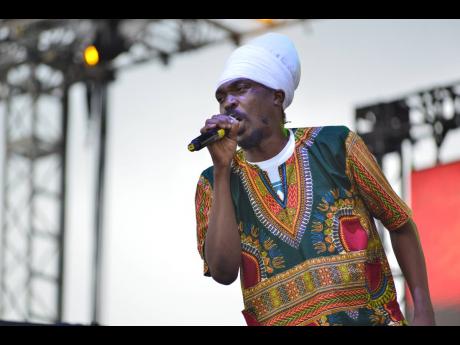 Hard-hitting reggae singer Anthony B is feeling good and feeling irie. In fact, that's the opening line of his newest banger, Chill Out, which he dropped right in the midst of the coronavirus pandemic.

The Rastafarian entertainer, who came to prominence with his Fire Pon Rome declaration, and who is known for his fiery condemnation of the 'Babylon system', is experiencing a mellow mood and feels that this flaming love song is a great way to show it.

A Collie Buddz and Johnny Cosmic production, on the Cali Roots rhythm, the groovy Chill Out, with its infectious beat, speaks to the entertainer's passion for reggae music, twinned with his love for his woman.

He sings about dancing and listening to some rub-a-dub, while "making love to the woman I love, to some reggae music".

Released on April 10, the official audio has amassed close to 54,000 views and a slew of positive comments. Anthony B is quite proud of this song and enthusiastically shared with THE STAR that last Thursday, Chill Out was added to some of the biggest reggae playlists in the world, on any platform.

"The people are loving Chill Out. The top 10 countries where the song is being streamed are the US, Germany, Netherlands, France, UK, Sweden, Canada, France, Italy and Switzerland," said the author of the book, The Secret To A Man's Heart.

But, love aside, Keith 'Anthony B' Blair is still quite zealous when it comes to exposing the Babylon system, but says that he is humbling himself to three things: the will of the Most High, time, and the laws of the universe.

"I am here giving Jah thanks for life and to be actually here in life at this moment of the awakening of the lion," the Boboshanti Rastafarian said, adding the prophetic "Babylon is falling".

"They are doing all they can to stay afloat. We are moving towards one world government. Soon persons will need vaccines as proof to obtain visas," he said, referring to the Schengen countries' proposals. "I don't live in Jamaica, so I don't need a visa. This won't apply to me, but I am just pointing out the new laws that are coming, and we cannot afford to be ignorant. We need to get the people to wake up."